Do you think Cesar makes house calls to Cincinnati? 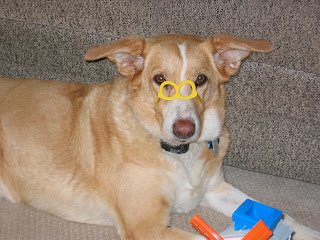 Where's a dog whisperer when you need one? For the last couple of weeks, my poor dog Scout (she of the no hands) has been behaving very neurotically. Scout is a 10 1/2 year old Australian shepherd mix -- we don't know the mix, but probably some Lab? Of all the dogs in our extended family, she's mostly the most low maintenance -- preferring to spend much of her day outdoors as long as there is a sunny spot to lie in. She needs love, but not much walking (or so I like to tell myself). She's been known to act more like a cat than a dog, actually. We've been through a lot together, Scout and I -- at last count we have lived in six different homes, with three other dogs as one time roommates.

She's always had her behavioral quirks -- in one apartment, she wouldn't step foot in the kitchen as it appeared she was afraid of the vinyl flooring. She had to get over that in the next apartment when the only spot for her bowl was in the kitchen, but she still ate and ran so as not to spend much time on the vinyl. She also has what appears to be even more sensitive hearing than most dogs I've been around, reacting strongly to high pitched noises by shaking all over. Smoke alarms send her into a shaking frenzy, as do fireworks, thunderstorms and high winds. Our current home has woods surrounding it that somehow intensify winds, and the screens in our windows whistle if the wind hits them just right, so she heads outdoors quickly on days that it's windy.

The shaking involves a full body vibration, usually starting in her hindquarters, but occasionally spreading to her entire body. Imagine you have chattering teeth, and you'll get the idea of the shaking. It is usually accompanied by panting and drooling, and then finding someone to paw at until she gets some attention. Once, when we had a Fourth of July party in our backyard, we put her inside to try to get her away from the sound of fireworks. One of our guests, a friend of a friend, went indoors to use the bathroom and came back with the report that Scout had stuck her nose in her crotch while she was peeing. Umm, nice to meet you, too.

These episodes are usually manageable, since they only come periodically, and on advice of the vet, we just dose her with some Benadryl and she calms down (read: is tranquilized) soon after she gets her little pill "treat" in some American cheese. However, lately the shaking fits are coming on a daily basis, and as far as we can tell, are triggered by any signs of cooking -- the oven being turned on, a pan being removed from a cupboard, the smell of toast in the toaster oven. Judge what you will about what this says about my cooking, but I have hypothesized that she has developed a Pavlovian response to the signs of cooking because she fears an impending smoke alarm. My smoke alarm is awfully touchy, I have to protest -- it goes off any time I use my bottom (non self cleaning) oven or the broiler.

I have no idea how to treat this behaviorally, and hate the idea of giving her Benadryl on a daily basis -- her life has been disrupted enough by the appearance of two children in her life. So mostly we just yell at her and stick her outside. I fear it is a sign of her advancing age, though I'm consoling myself that this is not the first time in her life that she has acted so strangely. In one of my apartments, she spent much of her time either trying to get into a coat closet and dig through the floor, or hiding curled up underneath my desk.

We gave her a good brushing on the theory that maybe she was frustrated she couldn't get rid of her molting winter coat. We've also put new batteries in her electric fence collar -- not sure what that was going to do, except I was afraid she was going to get so freaked out she'd bolt from the yard. She looks a lot better, but I'm not sure either helped.

J. is threatening that if we don't figure something out, he's going to go to the pound and adopt another dog, hoping it would be a good role model and calm her down. We better find a solution soon, as I really don't need ANOTHER poop producer around here.
(Do you think the torture depicted above has anything to do with it?)

Is Scout allowed in the new and improved basement? Perhaps she could head downstairs during meal preparation times. I know this solution doesn't get to the core of the problem, but maybe it would help.

Give the old girl a hug from me. If you've had Scout for 10 1/2 years, that means that's about how long we've know each other. Wow!

Oh, E...I feel you. We had a 57 variety mutt growing up. The sound of the smoke alarm made him spontaneously urinate. As he grew older, the sound of the fan above the stove triggered a Pavlovian response, because it was often a precursor to the smoke alarm. My parents have a tiled kitchen that abuts a carpeted family room. I will never forget burning a grilled cheese and accidentally but reflexively hitting the fan button on the microwave to help dissipate the smoke. I realized what I had done in horror and turned it off immediately, pivoting to find the dog half in and half out of the kitchen. Naturally, his business end was over the carpeting, and he looked at me sorrowfully as he lifted his back leg and let loose. I felt bad for him, and even though it's been almost ten years since he went to Doggy Heaven, I still hesitate a moment or two before hitting that fan button.