So, where did two months go? I'm not sure you'd be interested in the details, but we HAVE been busy, and for some reason, I've lost the ability to string together thoughts, and instead spend more time than is reasonable surfing around looking at nothing when I do get on the computer. April and May are busy busy months for us always, -- I think we were gone three out of four weekends a month from O's birthday until the Fourth of July last year, and we're on track to do half of that this year, with a infant in tow, no less. So, what have we been up to? I'll give a short version, though most of my readership I think is already aware of the highlights.

I'm ashamed to admit that I believe that I've passed along my over-fondness of birthdays to my progeny, as one of the major happenings of late was O's Birthday Week. I didn't mean for there to be a whole week, but when the actual birth date is on a Monday, you get free tickets to Sesame Street Live the Thursday before, your playgroup meets on a Tuesday, and the family wants to get together on Saturday, what are you going to do??? Ever since we had to do the countdown to the special days and their events, O. has developed an interest in the days of the week. "What day is it today, Mommy? What are we doing today?" As if each day has a party just waiting. And to a three year old, isn't each day a party after all? "We're going to the grocery store! Can I have a cookie? YAY! Mom, should we get a CAR WASH??!! We are going to the bagel place, this is going to be so fun!!
This year's birthday theme was O's Animal Adventure, due to his deep devotion to all things furred, hooved, scaled or tailed. Diego had a part, but largely, the animals stole the show, with many sets of tiny plastic animals lined up on all flat surfaces hoping for a spot on the big birthday cake. Here's the final product: 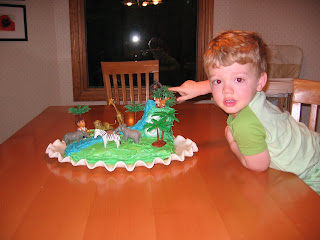 We had only a minor crisis in the cake production this year, surprisingly. O's first birthday cake(a bathtub with blue Jello water and rubber duck candles) was originally made without eggs by mistake and had to be re-baked. Birthday cake number two was a train, with separate mini loaf cars. The dog ate the caboose and log car while we were out to dinner the night before the party, and had to be rebuilt. This year's debacle involved O. breaking out in hives when he either accidentally ingested or just had a contact allergic reaction to some of the cleaning product used to disinfect said plastic animals before they went on the cake. Oops. A little Benadryl later, all was well.
What else? We've been enjoying the outdoors when it hasn't been rainy and cold -- here's the best of the thousand tulip pictures we took out front. 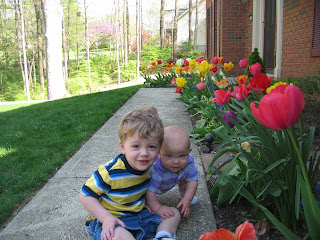 Additionally, J. and I got to take a trip without the babies to Cancun, due to his winning a sales contest. It would take far too much time to detail the angst and anticipation involved in the preparations for that trip, so I'll just say that all went well, even taking into account N.'s 12 hour pout on my return.
We're currently living in a mess around here as I try to renew my teaching license by taking some less than thrilling courses "at my own pace" (read: snail-like and disjointed) online. I'll try to keep you posted on my progress there -- so far it just makes me a little ill every time I have to try to put together more than three sentences about helping students manage their impulsivity or learn with all of their senses. Needless to say, I should be watching a video class right now rather than writing this, and the psychic pain that creates is clear evidence for why I can never return to teaching full time.
But, before some of the cute things my children are doing right now slip my mind (or really, before I lose the scrap of paper I've jotted them down), here are some O and N updates:
N. has learned to sort of wave, though it's more like a stiff armed taxi hail than an actual wave. She will also high five if she's feeling happy, and she has two crooked little bottom teeth to show off and with which to gnaw on zwieback, wagon wheels, bagel crusts, and any sort of small object she finds on the floor. She is capable of finding anything you dropped and thought you'd lost for good months ago. We're getting good at the finger sweep to the back of the throat. She cruises around on any and all pieces of furniture, and finds water sources such as toilets and dog bowls irresistible. But mostly, we spend our days keeping her away from the shoes. She wants them all, and she wants to lick them quite completely before surrendering them. Given my habit of leaving them everywhere, it's an uphill battle.

We're probably watching too much TV:

We're headed to the Lake (our sister and brother-in-law have a place outside of St. Louis) this weekend -- see you back here to report on the weather, fishing, boating, swimming and the seven hour car trip.

Worth the wait! I'm so glad for all the updates and to hear your voice again. Also, I am very impressed with the beauty and ABUNDANCE of your tulips!

Your online class sounds like torture. Is the icing (or the disinfectant on the animals on the icing) on the cake some sort of online portfolio at the end? Nothing education educators love more than a portfolio assignment! I am realizing that I think my license might also expire this year, which is scary because I remember renewing it in 2001 and thinking, "I've got eight years left on this, that's forever." Of course, I guess maybe that means it's up in 2009 (hey, wasn't a math teacher). If renewal requires an online course, I don't think I can hack it.

Happy to read about our two favorite people again! I have faith that you will complete your courses and be the good Mom that you have been, even with all that goes with having a preschooler and a crawling/cruising baby.