Adventures in Bugs and Other Childhood Joys

It's cicada season here in the Small World, and the background noise of cicada song in our woods is certainly not small. Standing in our front yard, the din is darn near deafening, hard to believe it is caused by some mere insects. We are in a prime emergence location for Brood XIV, and the insects can be found on just about every crawl-able surface. If you aren't familiar with the cicada phenomenon, you can read a little about it here.

We've been anticipating its arrival for over a month now, but I have to admit, it's one of those things that you're really not sure is going to live up to the hype in the newspapers, local news, etc. until it is really upon you. That's even after living through the emergence of a different brood in our other house (just a fifteen minute drive away, but not affected this time) the year J. and I got married. I was even more skeptical last time, when Old Time Cincinnatians were holding forth with stories about women running away from swarms of bugs flying up their skirts, and layers of insect carcasses carpeting lawns. No way, I thought.


And then, my brother literally filled a garbage can with the dead ones so that his dog would stop eating them and getting sick. I remember sitting waiting to go through the car wash, and there being a tornado-like cloud of cicadas buzzing my car. I've told those stories to a couple of people who have not yet experienced the red-eyed creatures, and I can see them rolling their eyes.


But last week, O. and J. easily filled a gallon sized Ziploc bag with them in less than a half an hour in our front yard. (Apparently, they make good fishing bait, and I guess we're going to store them in my freezer in a Pringles can. Yum.) Surprisingly, O. shows no fear of them, and likes to grab them by the wings, listen to them sing their song, and then throw them up so they can fly away. Like this: 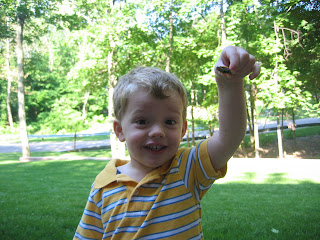 It's starting to smell down around the edge of our trees, due to the rotting insect protein. Wondering how long that lasts in the 90 degree heat we're expecting.

So, while we're obsessed with insects (O. keeps asking if he can go on another "hunt adventure" to collect more), why not feed the love? The caterpillars for O's birthday butterfly garden arrived by mail last week, so we're keeping a close eye on the cup full of them on the counter, waiting for them to spin chrysalids so we can transfer them to their habitat.

Also, we had planned to make our first trip to the pool today (more on our recent membership at a local swim club in a future post), but the weatherpeople got it wrong again, so the rainy day sent us to the Butterfly Show at Krohn Conservatory. Given the plethora of insects available for close up observation of late, I'm not sure it was quite the thrill it would have been otherwise. But, O. did love exploring the "jungle" and was VERY intrigued by all those prickers in the cacti room after his recent experience with a splinter in his finger and its painful removal. It also made for some excellent photo ops: 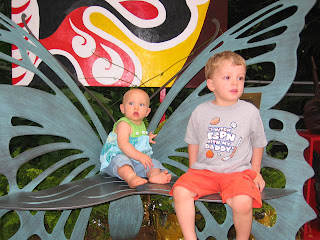 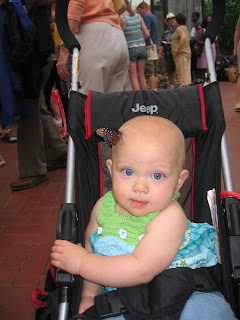 Okay, I know this post is getting very long, and J, I know you're still waiting to hear about the lake (but hey, didn't you live it and the seven -- oh, I mean eight and a half -- hour car trip with me??) but I think I'll just add a little about the trip O., N., and I took last week with my mom.

We went to Pennsylvania to visit my grandmother and my cousin and her new baby, and had a great time despite some brutal driving through monsoon-like rain. We spent a couple days at our family's cottage. A little piece of rural heaven on a small river (AKA crick) in the woods, it's only a steps up from camping, but many of my happiest childhood memories come from time spent there with my parents, grandparents, and cousins.

Though I only spent a couple of weeks there each summer, in my memory, days spent there have grown to encompass practically the entire time between Memorial Day and Labor Day. We spent long hours floating in inner tubes and rowboats; building ponds for crayfish and fish we caught and sometimes ate; catching "snipes" and lightning bugs; and playing kick the can, badminton and croquet. We painted rocks to look like animals and other shapes, then sold them to whatever adults were nice enough to indulge us, and took marathon bike rides to buy candy and pop at a tiny grocery store all by ourselves. One summer, I caught a ton of fish using a tried and true method of spitting on my worm. The next summer, I did not catch a single bluegill and gave up fishing forever.

We threw sticks into the crick on one side of the bridge on the main road outside camp, then watched them float to the other side, then raced back down the dirt road, convinced we'd be able to identify our sticks floating by our cottage. My cousins, brother and I spent rainy afternoons playing rummy and spoons on top bunk beds inside, and I read stacks and stacks of library books. We had Top Chef-worthy meals of mountain pies, s'mores, and hot dogs that had only fallen in the campfire briefly.

Those are only a few of the moments I could share about growing up at the cottage. As I raise my own children in a time when true childhood magic seems threatened, they are the moments I turn to to shape the kind of life I want them to experience. Despite the fact that the weather was not at its greatest during our short visit last week, below you'll see a few photos of O. getting a good start. That's all three of us on the bridge, right after O. watched his stick appear on the downriver side. 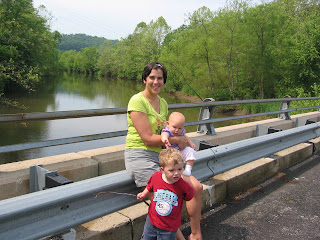 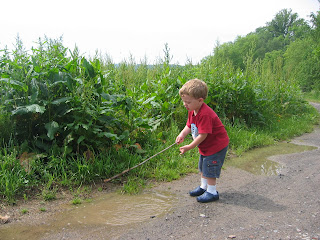 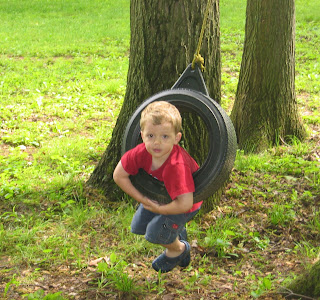 Who needs a hairbow, when you can wear a butterfly?!
Thanks for the cottage memories. M.

I have no doubt that you'll make sure both O and N have magical childhoods!

Sorry about the cicadas! I still remember reading and being totally horrified by a newspaper article about a man who ate cicadas back in seventh grade science class. It does sound like a Top Chef Quickfire though.

How terrible that you had to endure two recent broods. We had them the year J was born, and I remember being bitter that my leisurely walks with my firstborn were bug infested. I forgot they were invading the east side (tried to block out the horribly lame article about the ladies in indian hill dressing like cicadas), so we were surprised with them at Kings Island over the weekend. They were noisy, but didn't swoop as much as I'd remembered.