"I Get to Carry the Rings" 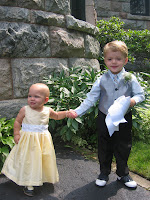 Congratulations to my best loved brother on his wedding to my favorite person to ever share a name with: A. and the Other E.
Thanks to both of them for sharing their day with us, and for giving O. what I'm hoping will be one of his first memories of a really fun party. He was so thrilled to have a job, and then to get to DANCE! He said today he can't wait for their next wedding, and I know he meant to each other.

We were unsure whether or not O. would come through on the role of ringbearer, as his separation anxiety of late has been intense. It was a last minute go or no proposition, though he acted excited if you asked him what his job was at the wedding (see title above). We had arranged for him to walk with my cousin, one of the groomsmen. O. is nearly as infatuated with him as he is his uncle. Or maybe he just has a little crush on my cousin's beautiful girlfriend. I think it's a little of both. When the music started playing though, he had a little moment of panic, and the solution was the one you can see at the top. He walked down the aisle with the groom, and that was okay. You'll notice we didn't really practice holding the pillow as you'd imagine, ceremoniously offering up the rings. Looks more like he's got his books all ready for kindergarten.
Today, we were having a rough morning. Little sleep due to a fierce thunderstorm and power outage, and the power was still out when he woke up. He didn't really understand why the TV wasn't working for him to watch a show. When I finally talked him into going upstairs to get dressed, there was the ring pillow lying in the hallway where I'd unpacked it and laid it out so I'd remember to give it back to the bride and groom. O. saw the rings still attached (they are decorative ones made for the pillow of course, not the real deal) and burst into tears again. "Mommy, Mommy. I forgot to give E and A their rings!" It was as if all the credit he had taken for doing such a good job at the wedding was a sham and he knew it. Even worse, the "big dinosaur toy I can hug" he was promised as a bribe by Daddy might be in jeopardy. I rustled up a story about those being special memory rings for E and A to have to always remember their wedding and his help, and that A had other rings in his pocket to give to E, so they had those with them on their trip. He seemed relieved, if not entirely convinced.

Anyway, the wedding was one of the most beautiful ceremonies I've ever attended, with all the time and thought ahead of time clearly going to the details that they'll always have in their memories of a gorgeous day. I wish I had a good picture of the two of them to share in addition to those of my own little family, but they were having such a great time at their own party, it was hard to get them to stand still long enough for one. E. told me "I love my wedding!" and I'm so glad she was able to be present in the moment enough to know that she did. They're currently in paradise for a two week honeymoon, but judging from how happy they looked together on their wedding day, I'm pretty sure that the paradise has just begun.