Steppin' Out With My Babies

I don't know if this is apparent from my posts, but complacent babies are something I do not have. I've always been jealous of those babies who seem perfectly content to stay in the stroller/cart/wagon/high chair/playpen and watch the activity at hand go on by. When O. was about 16 months old, I enrolled him in a tumbling class. There was another child, a younger sibling of a boy in the class, who was two months younger than O. and spent every class session burbling away in his pumpkin seat while O. attempted to learn a somersault.

I have pleasant fantasies of tending to my flower beds while my daughter sits contentedly on a pretty blanket in the grass while my son amuses in the dirt with trucks he's fashioned for himself out of twigs and grass. But no, whatever the means use I try to contain either of my children, either physical barrier or mental distraction, it is always but a fleeting moment of peace I get to accomplish a task.
Sure, when N. was tiny, she had a short time when she was one of those "luggage" babies that you could take places in the pumpkin seat, and she'd just sleep the meal or activity right away. And truth be told, she's a good daytime sleeper still, if I give her the opportunity to nap. She'd be happier doing it on my chest, but we've finally gotten to the place where she can sleep in her crib for an hour or so. But right around the end of that 'fourth trimester,' N. decided that the car seat was not that fun a place to be -- my hip seemed a lot better place to see the world, and thus, the fight to get out of it, the stroller, cart, whatever, began.
Grocery trips tend to fall apart right around the time O. finishes the cookie we pick up in the bakery department, and N. loses interest in licking all the germs off of the cart handle. I spend most of my time in the frozen foods trying to pin O. to the glass with the cart so he can't jump out of the car up front, or protecting the backs of my ankles from ramming injuries with a "little cart" if I've temporarily lost my mind and let him push one. By the time we get to the checkout lane, I'm once again holding N. while she screams, and unloading the whole cart one-handed. All twenty jars of baby food.
We get halfway through lots of things before we have to abandon the stroller: the zoo, the museum, trips to Kohl's. Then I'm left with a baby on one arm, pushing a stroller with the other, and yelling at O. to stay RIGHT HERE NEXT TO ME. It's exhausting and frustrating.
However, when I compare the experience of raising my children to the one I might have had if they were more containable, complacent children, I realize that many of my most treasured memories of their brief lives so far are ones related to their very active and engaged personalities. O. pushing an overturned laundry basket around on seven month old legs, climbing up on top of his pile of presents on his first birthday, holding his daddy's hand and walking down the hill of our yard, and jumping like a kangaroo at the zoo. N. sitting up on her own at five months, gumming her favorite striped ring; crawling at lightning speed toward the shoe pile, pulling herself up in her crib and stretching out her arms to be picked up, standing UP on my lap and twisting around so she can see what's going on in the room WHILE NURSING. And now, here, at ten months of age: some of her first steps caught on camera as she toddled over to me: 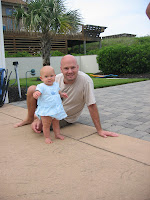 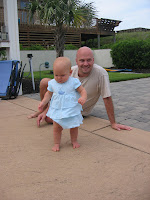 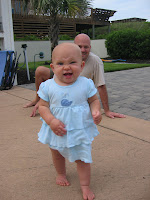 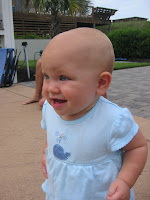 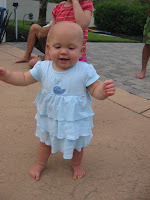 She is so darn proud of herself. She can't hardly stop grinning as she moves around the house, sometimes in circles, because although she's got the steps down pretty well, she just has to go with momentum so she won't fall down.

So, although my babies didn't spend much time in that "sit on your lap and watch the world go by" phase, choosing instead to continually look at me as if to say "Okay, that was a fun trick to learn. What's next, Mom??" it is true, for O. at least, that once he learned to walk, he became such a happy and ultimately pleasant child. Active yes, but satisfied, finally. Here is my active and satisfied boy, showing off at his beloved uncle's wedding (more on that to come) over the weekend: 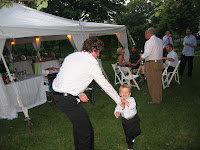 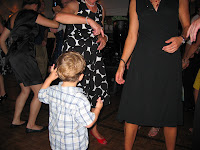 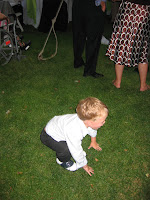 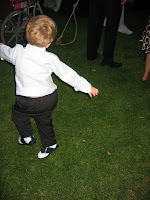 ". . . or protecting the backs of my ankles from ramming injuries with a "little cart" if I've temporarily lost my mind and let him push one."

Seriously, who doesn't regret the little shopping cart about 5 seconds afterward? I almost peed on the floor of Trader Joe's when I let Bub take one and then had to chase him down and wrestle him back into the regular cart (and then return to the juice samples 12 times to get through the trip).

"Then I'm left with a baby on one arm, pushing a stroller with the other, and yelling at O. to stay RIGHT HERE NEXT TO ME. It's exhausting and frustrating."

Thanks for the glimpse into my future, though so far, I am a real tough ass about not letting Bub get out of the stroller.

I love, love, love this post and think it should published somewhere. I think you know that my Bub was not one of those complacent type babies. Baby Boy is angel so far, but it's perhaps too early to tell . . .

Well, You've done it again, made this G-ma cry.
Maybe I'm still on the emotional euphoria of this past weekend or maybe it's just reading about our wonderful grands! M.