Dear O., On Your First Day of School 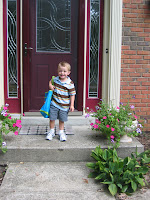 Though today was my thirty-fifth birthday, I know I will always remember it as the day you first had a life separate from mine. Oh sure, you've been away from me before, but it's always been to stay at home, or with grandparents, not to do your own special thing. Starting today, you'll stay at school all morning and have your own routine with people I'll never really know except to greet them at the beginning and end of the day.

From now on, there will be a part of your week I'll only hear about secondhand, and often through the filter of your own three year old distraction and interests. 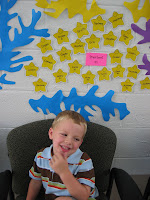 You're only three, and already, when I ask you what you did today, you say "I don't know" or "nothing" like the bored teenagers I used to teach. I can draw more out of you if I ask the right questions:

"Who got to sit on the star today?" "Wachel. But not my friend Wachel."

"What did you get to eat for a snack?" "Pretzels! Big stick ones!"

"Did you play with the dinosaurs when you got there?" "Yes, and there were other amimals too. They even have an anteater!"

Information also bubbles out throughout our daily activities, such as when I squirt some hand sanitizer on your hands and you lace your fingers together to spread it around, saying "I learned this at my preschool. You need to clean your hands before you eat, there are germs on there and you can't even see them."
Later, you are talking to your toy animals and I hear you say "Amen." Unfortunately, not a common part of your vocabulary. When I ask if you've said a prayer at school, you say "Yeah, it was for Jesus." And then you invented a birthday prayer for your sister: "And N. is my sister. And tomorrow is her birthday and I love her. Amen."

I was worried that you weren't ready for school. That you would hang onto my leg as I dragged you across the room, or run after me down the hall, screaming, as you've done other times I've tried to leave you with someone else. But, after a moment of panic and tears, you were distracted by the toy dinosaurs and cautiously followed the teacher across the room and away from me. And based on your report, you had a great day, painting, playing outside, having show and tell, and pretending to go to the zoo.

I worried that your teachers wouldn't get to know the funny, sweet boy that you are, one who invents his own language even still, and tells nonsensical knock knock jokes, and dances with great big stomping feet and curls up next to me on the couch to say "I love you, Mom." I was worried that you might come across as a little odd, putting your hand on your hip to talk and gesturing with your hand to tell just how things are going to be, as you sometimes do with new people. I was worried you would pretend you couldn't speak or that you don't know how to do all the things you do. I was worried you might get your spirit crushed by unkind children who didn't understand your sweetness. Just last weekend, you brought your blanket down to your almost five year old cousin so he could have it while he slept over at your house, and he looked at it like it was germy, and I was so glad you didn't notice. But as you have reminded me with delight and relief, "all the kids there are my same age!"

Now I'm worried you're far too ready for all of this. That it's all so commonplace that we'll stop valuing the victories of new things that up until now have been so hard won by the anxiety and struggles of separation.

My hope for you this year was that you would be loved by kind caring people other than your family so you could learn how to be a part of the world outside our house. Your teacher calls you "Mr. O." as she gives you a high five and a giant smile on your way out the door and I am glad. The teacher's assistant, a proud grandma who has told me about her two grandsons already though I've only had two brief conversations with her, had tears in her eyes at the end of the first week. Whether she was choked up about watching young ones reunite with their moms, or was laughing so hard she was crying, I don't know. Either one is fine with me.


You're in a good place. I like having another cup of coffee in a quiet house while N. naps. But I sure do like seeing you come down that hallway to me. 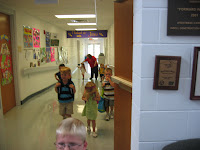 You are a wonderful mother and as the post so eloquently attests, a wonderful writer. I know O will treasure this post someday in his future.

Thanks for including some O speak as I really love it: "Wachel. But not my friend Wachel."

My head is spinning right now with the new baby and the dissertation so I hadn't paused to consider the significance of dropping Bubby off tomorrow and not staying (last week mommies stayed). I'll think of you tomorrow when I drop off and pick up.