It's been a busy couple of weeks around here, though I couldn't really tell you what has occupied all the time. We had a computer virus to recover from. I've been spending an inordinate amount of time dealing with photos, uploading them, sharing them, trying to get them sent out to people who haven't seen the kids in a while, everything but backing up the hard drive and getting them in albums. Hello. Shouldn't this be first on the list, given aforementioned virus? You'd think.
Most notably, though, the kids, my mom and I had a great visit last week with my grandma and my aunt in Pennsylvania. It was our first trip to see her since she moved back in to her rebuilt apartment after a fire burned her retirement community and she lost everything she owned.
It is amazing. Everything was rebuilt on the same footprint as the old building, so when you walk in her place, it as if time has been rewound, and the walls went right back up. Even the pictures on the wall in the entry lounge seem to be copies of those that were there a year ago. Grandma has all new furniture, but we've been able to reproduce many of the photographs she used to have on display and she's gotten some heartfelt gifts from friends and family to replace treasured knickknacks. Still, it must be disconcerting for her to be in a place that looks so similar to her old home and not have so many of the things that used to fill it. I imagine her going to drawers to find things, only to have to remember it isn't there anymore, and it gives me physical pain.
My kids went in and roughed up the place as only a three year old and a one year old can. It certainly looked lived in as they tornadoed their way through a day with Great-Grandma. O. enjoyed several games of Go Fish and Uno with her, while N. spent the day carrying around fall decorations and escaping out into the hallway to find more elderly friends to fawn over her.
Late in the afternoon, we got the kids dressed in their Halloween costumes so my grandma could see them, then had an impromptu parade down the hall to visit each of my grandmother's friends.
Visiting her is something like being back in a college dorm, just with residents a couple decades older. There are fliers advertising activities, people popping their head in to ask you to come eat dinner, and even some of the same cliquish behavior. My grandmother plays cards every evening with her girlfriends, and plays shuffleboard outside when the weather is nice. It's the kind of place you wish you could create for yourself. After a year spent in a rented out wing of nursing home with only a few of the other residents, I'm so glad she's back in her real home amongst her community of friends.
I feel so blessed to have a grandmother still living, and still in such a strong mental state.
Grandma is a woman with an amazing force of personality. Sometimes bossy, at times particular and demanding, she is perpetually full of devotion and pride in her family. She thrills in naming off all the places around the country where she has children, grandchildren and great grandchildren. So many of my fondest childhood memories revolve around time spent playing and learning from her and my grandfather, and just generally basking in their love. It is so wonderful to see my children get to enjoy her love and create memories of time spent with her.
Before we went to visit her, O. was counting all of his grandmothers on his fingers. "There's Grandma and Grandpa Grandma, and Grandma Choo-Choo, and Grandma E., and Aunt A. (my mom's sister, who certainly loves my children as she does her own grandchildren), and don't forget Great-Grandma!" I like to think he's made it to the point where he will retain some long term memories, and I sincerely hope that among them are the times he spent in the company of my dear grandmother in her home.
Here are a couple of shots of the kids in their costumes, actually from the week before our trip to PA when we made a trip to our local nursing home with my mom's group. Besides N's celebrated status as the "fire baby" (She was born a couple of weeks after the fire, when my grandmother was staying with my parents temporarily. My grandmother insists this joyful event helped her to survive the tragedy.), can't you see why they were celebrities for the day? 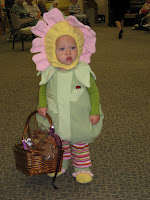 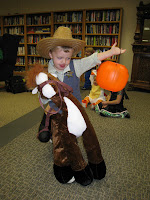 Thank you again for using your beautiful gift of words to bring memory to our lives that I cannot ...such a joy...Love, Aunt A.

Due to some strained family relations, it is challenging for me to visit my only living grandma. I am very sad about this because she was such an enormous influence on me as a kid. We were able to spend some time with her on a visit home this past summer, though, and she was able to meet my daughter, which was a real treat. It sounds like your grandma is one special lady and O and N are so very lucky to have her in their lives.

I always enjoy seeing your grandma, one of the proudest ever and with just cause! I also love how close you are to your aunts, uncles, and cousins.