On the Sixth Day of Christmas...

O had his first Christmas program at preschool! In the week or so preceding, I kept asking him if they were practicing any songs for school, and the only thing I could get out of him was "Twinkle Twinkle Little Star." I thought this sounded a little lame, but maybe my expectations for three year olds are a bit high.
The day of the program, J. asked him about it, and O. revealed that they had been to "church" to practice. J. asked if they were singing Christmas songs, and he said "only the God ones."
Sure enough, the night of the program, we were treated to the most adorable rendition of something called "The Little Shepherd," a song and narration show involving lots of hand motions. The cutest one was a repeated refrain of "a box of hay??!!" with arms out in an astounded, questioning way.
Here they all are, lined up in the church to sing: 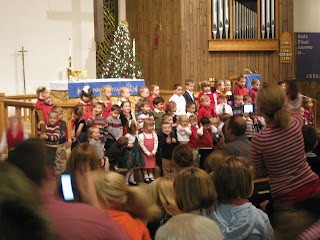 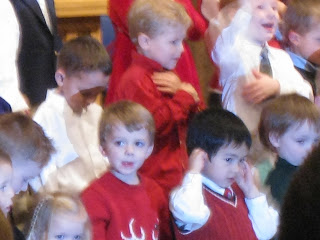 Here's my boy looking particularly pensive and angelic, as all those around him perform different motions.
And, for hard core fans, here's a low quality video of a few seconds of the performance. I didn't remember I could take a video with my camera until close the end, when things were falling apart a bit, but you can get a sense of things, including the crying baby in the audience (not mine!). I'd love to hear your own memories/stories of Christmas programs in a comment!

Bub's Christmas concert was yesterday morning. It was complete chaos and totally cute. I also took some video on my camera, which I hope to post if I can muster the tech confidence to figure it out.

Not to brag, but when I was in preschool, I sang a solo at the Christmas concert. It was not because I was a good singer (I am not) but because I knew all the words to "My Favorite Things" from The Sound of Music. What did that have to do with Christmas? I don't know.