On the Eighth Day of Christmas...

...there were some sweet treats being baked up in the kitchen of the Small World. First, we worked on Mommy's famous peppermint chocolate bark. 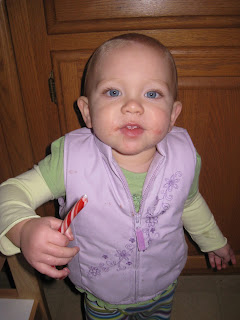 N. really only liked the candy canes with the plastic on them. Figures. If there's no choking/falling hazard, she's out. 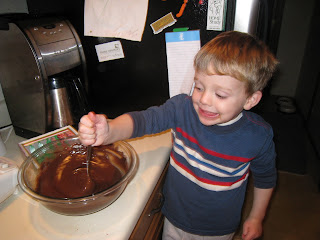 O. was a good chocolate stirrer, but the most fun was chopping the candy canes up in the blender and seeing peppermint "smoke" billow out the top of it. (I have since discovered, while trying to make a fatten-up smoothie for N., that my blender is now officially only good for candy cane crushing duty. I blended that ice cream/frozen berry mess for a good five minutes and only got a few of the chunks smoothed out.) 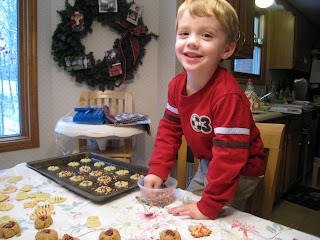 And then we were on to the cookie press cookies. (Oh, and MEP, there are the peanut butter jammie balls too -- no one has eaten a single one). O. spilled a good 3/4 of the container of sprinkles on the floor, then used the rest to cover one pan of cookies before losing interest. He was enthused about preparing these specially for Santa, stating "Santa likes his sprinkles nice and flat, so I will pat these down really good." 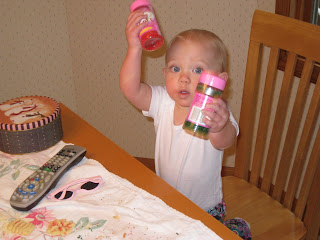 N. arrived on the scene late, after a nap, and took her rock star sunglasses off long enough to play the sugar maracas. 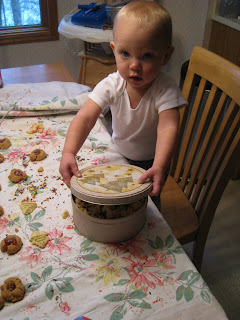 And to close the lid on the project for me. I'm the only one that has eaten these cookies. O. prefers the ones I bought for 1.29 at Kroger that come in a box with cartoon snowmen printed on it.
Oh well, it's all about the memories, right? (Speaking of, that's my grandma's tablecloth we're working on, from the kitchen table I grew up making cookies around.)
Posted by E... at 9:36 AM

fun with sprinkles! it's the glitter of cookie baking.

thanks for visiting my blog. i hear you about the photos on blogger. i struggle with it too, and wonder how it looks on other people's screens. i just get it so it looks (sort of) how i want it on mine, and hope for the best. right now, i am on a relative's pc (i have a mac) and the whole blog looks strange. oh well. you can only control so much...
happy holidays.

Tis all about the memories and all about excuses to eat more treats. Your peanut butter jammies are not so turd-ie as my Oreo Balls, but perhaps less visually appealing than one would wish!

I was in bake mode all weekend myself, although my little one isn't much for helping yet. Her job is to keep me distracted so that my job takes three times as long.