This One's for Grandma Choo-Choo

O. got a big wheel for Christmas! It was a gift from J's mom, who was thrilled to be able to give him something that her own youngest boy had loved so much as a kid. J and I were excited for him to have it as well, since both of his had worn out the front wheel of more than one of them on our respective sidewalks.
The plan was for J to assemble it on Christmas Eve, so he could at least ride it up and down the hallway of Grandma's house on Christmas morning. Alas, when we opened the box, the little baggie of hardware (screws, and other various assembly bits) was missing. Not anywhere in the mix of instructions, stickers and plastic parts. And so, we had to promise O. that Daddy would put it together when we returned home.
Those folks that manufacture Big Wheel had other plans, though. The instructions gave an email address to contact them, no phone number. J. wanted to just order the missing parts from the website, for $3.99 plus shipping, but I insisted that was ridiculous. We were supposed to have the parts, we shouldn't have to pay for them. It took a week to get a reply to our initial email, at which time we were informed that we would receive our parts in approximately 20 business days. What??? I was outraged, but J. was taking over this issue. I spend enough time on the phone complaining to the insurance company, and had already handled my own week long Christmas defectiveness debacle with Amazon's Kindle department, so I let it go.
Anyway, everytime we got in the car, O. would look mournfully at the Big Wheel box and ask if the screws had come in the mail yet.
Yesterday, well earlier than those pronounced 20 days, the screws arrived in the mail. J fessed up that he had sent a followup email. He broke out the industrial sales jargon, using words like "unacceptable lead time" and "expedite" and got results. He never wants to get involved in this sort of thing at the end of the work day because it's what he does all day long, but now he's proven that he may have to step in and save the day a little more often.
Here's some video and a photo of Mr. Big Wheel himself: 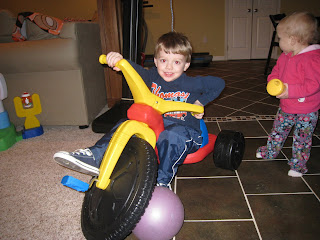 "He broke out the industrial sales jargon, using words like 'unacceptable lead time' and 'expedite' and got results."

Just goes to show that a good vocabulary is the gift that keeps on giving. I am really so excited to know that big wheels are still out there. I can't wait for the Bub to be ready for one (and am glad we don't live near hills because I recall some of the stunts my siblings and I, not really a daredevil, tried on big wheels and it makes me nervous to think of it).