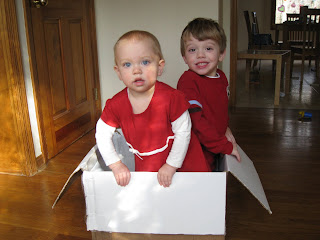 The kids have been into playing with boxes. O. decided he was going to try to make a "spaceship" but in his mind it involved sticking the boxes together with glue somehow. When I wouldn't give him the Elmer's or glue stick for this project, he found a tube of chapstick and proceeded to smear it over the side of one box.
I finally talked him into making all the boxes into a train instead. Here they are, along with animal engineer/passengers. 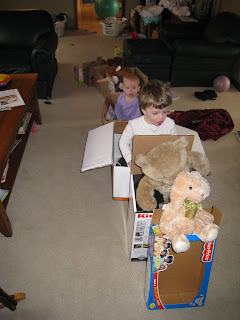 Oh, and I thought this one was just cute, too. 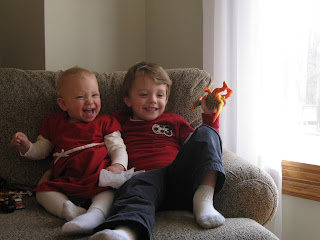 Five years ago today, my husband and I got married. Happy Anniversary to us!
This seems like a long time to me, but may surprise others, who assume that since we went to the same university, we must have met there. Oh no! We say, in an exaggerated way -- as if the thought of the two of us in college together is unthinkable, hilarious, even. It's true, there may have been a few times that we were in the same places. Say, I, in my enormous wool rollneck JCrew sweater was hanging out on the edges of Stadium listening to a band while he and his fraternity buddies were playing foosball and hammering Nati Lights. Or he, dashing into the library in his flannel shirt and wornout "Beavers" baseball hat for a group study meeting passed by my favorite study carrel. But for the most part, we were on very different paths back then.
In J's own words: "I never liked indian food, independent movies, dark green lettuce, plays, art, yard work, edamame, goat cheese, pesto, pine nuts, or liberals until I met my wife. Now I like one liberal."
As for me, I didn't like college basketball, Skyline Chili, steak au poivre, asparagus, red wine, Sunday football, politics, Cleveland, or conservatives until I met my husband. Now I like one conservative.
Also, before I met him, I could not play video games at all, never noticed that a large percentage of people in crowded places are really annoying, and thought a dutch oven was something you cooked with.
Our wedding was a second wedding for both my husband and myself, and I'm convinced that everyone should get the opportunity to plan a second wedding, even if you still like the person you had the first one with. All the things you settled for, gave in to, or otherwise needlessly obsessed about the first time around are now your own to do with exactly how you wish. And it doesn't hurt to have your fashion and hair choices a little less dated in that giant wedding photo on your wall.
Ours was an intimate affair -- less than one hundred people with a ceremony at a Methodist church with big glass windows and lots of gorgeous winter light. It was followed by a cocktails and hors d'oeuvres reception at his family's restaurant, overlooking a snow covered creek. I'm proud of the fact that people still mention the lamb chops more often than the fact that the Columbus highway sniper was still on the loose for our guests' commute when they reminisce about that weekend.
We had been dating for almost three years exactly the day we got married. I think I used the term "adorable" to describe J. the first time I mentioned him to a friend after I met him, and it's true, I had a feeling he was a keeper from the start. But truly, it was on Valentine's Day 2001 that I knew that we were going to be together for a good long time.
I'd had a hell of a day, waking up with a fever but trying to go to work anyway because I had an academic team match that had already been rescheduled once because of snow. (Just thinking about this makes me cringe at how small and sad my life seems in recollection) I had no food in my apartment, so I stopped at my neighborhood bakery to get a muffin and a coffee. Standing in line, I got very lightheaded, and actually passed out right there on the floor.
Some kind stranger offered to drive me home, I accepted, and called in to school sick. The assistant principal I talked to said "Well, we'll try to find someone to cover your class." but it was clear: I was not too popular at MHS that day. So, after a couple of hours of sleep, I walked, in the rain, the mile or so back to the bakery to get my car and get to work in time for the academic team match.
I was feeling pretty sorry for myself: no love for me this Valentine's Day. That sweet guy I'd been on two dates with and had known only a week and a half? There was no way I'd be hearing from him on VALENTINE'S Day. That'd be breaking all kinds of bro codes.
But...he did. No, no flowers or candy or house outline in candles or any other sort of grand romantic gesture waiting for me. But he called, and we talked, and I think he even acknowledged that it was Valentine's Day. And to be quite honest, until I sat down to write this post, I have not ever recalled all the gruesome details of that sad rainy February day, because what I have remembered is that phone call.
After that, it's hard for me to remember too many of our other "firsts" -- our lives just started to be spent together.
At the time I met him, my life was at a crossroads. I'd gotten through some rough patches, and was looking around enough to see that it was time to be moving down a different path. The only question was which one. It's still amazing to me how clear the direction ahead became once he walked into my life.
Oh, and what a life it is.
Posted by E... at 12:00 PM 4 comments:

Six More Weeks of This, Really?

So, in honor of Punxatawney Phil seeing that darn shadow, and with it bringing the potential of MORE encounters with cabin fever over the next six weeks, I thought it was time to break out the poetry. If we can't end winter early, at least we can celebrate it with some beauty. Here are some links to some poems I took some solace in last week amidst the ice.

Poems for a Long Winter's Night : Several poems, collected by some people at the University of Chicago.

Poem for Salt by Leroy V. Quintana: not the best link, but it's in the body of this article about another cool thing: Billy Collin's Poetry 180 program from when he was Poet Laureate. This one's more fun than anything.

Fragmentary Blue by Robert Frost : this one's less about winter and more what we wish for on its grey days.

There was another one I wanted to share, but I can't find a link anywhere, and now I've also lost the scrap of paper I had it on, so I can't even break copyright law to share it with you. But, if you happen to have access to Philip Larkin's Collected Poems, check out "75 Degrees North. Blizzard." Beautiful.
Posted by E... at 8:05 PM 1 comment: