Goodness Gracious, We're Back from the Cretaceous.

I have a little birthday letter planned for O., but since N. is not cooperating with my idea of a proper nap schedule today, it probably won't happen until later this week. But since we had such fun celebrating his fourth birthday in grand dinosaur style, I thought I'd share a few photos now. 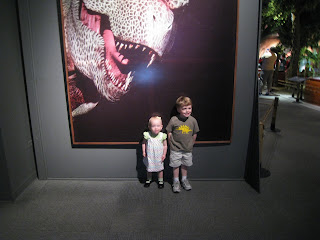 Here are the kids at the dinosaur exhibit at the museum:
the family birthday outing.
The light in there was not so good, and they were not so willing
to stand still, so not the greatest quality shot. 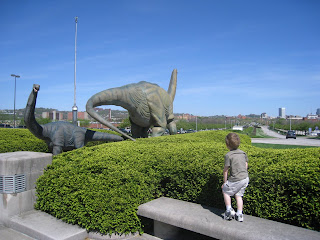 Outside, looking out on the city along with the brachiosaurus pair. 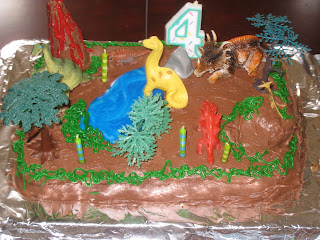 O's dinosaur cake, modeled directly after a photo we found. I wanted to make the one in the shape of a stegosaurus, but O. opted for the one with the volcano scene. The birthday boy gets what the birthday boy wants. I didn't get any photos of the other volcano -- the sand/chemical reaction model we made for a party activity. It worked out pretty well. At least, it was impressive to the four year olds.

A photo essay by Owen, the day after his party, of the dinosaur loot he's most enamored of: 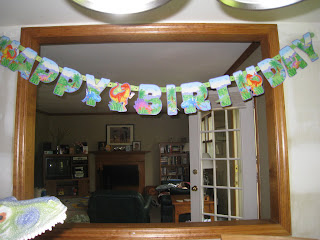 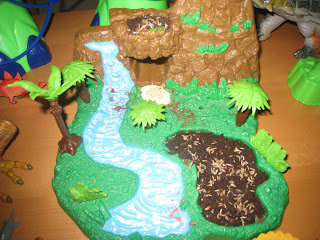 Dinosaur mountain that you grow real grass on: note seeds and dirt. 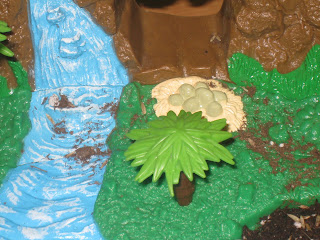 Closeup of the dino eggs and palm tree. 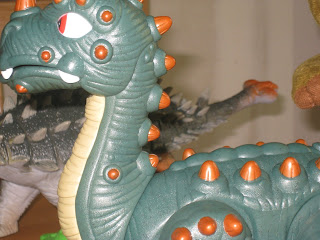 And finally, this afternoon's project: convince O. that he does actually have a lot of dinosaurs, and thus does not need to spend all the coins in his train and piggy banks to purchase all the dinosaurs pictured on the back of previously mentioned dinosaur/grass growing mountain. The resulting evidence: 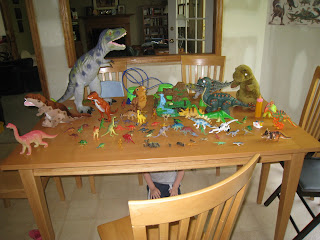 Wow, that is a might large collection of dinosaurs!

I'm very impressed with you and your birthday party volcano-ing. I bet the kids loved it.

Do you guys read the book Danny and the Dinosaur? It was one of my favorites when I was little. We are not big into dinosaurs around here yet, but we do like the "How do dinosaurs . . ." series of books.

Bub has been asking for a dinosaur movie. Any recommendations?