No Yolk, Baking Without Eggs Is Not That Bad 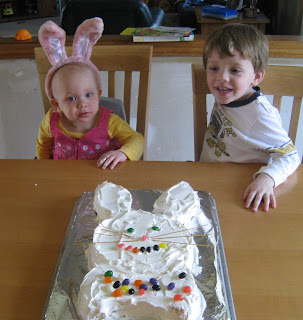 I know it's far past Easter, but I thought I would report that the season of eggs came and went in our household without anyone ingesting so much as a white. We did, however, dye several dozen, One kit had dinosaur transfer tattoos that made it look like creatures were hatching out of the eggs, and O. is still sporting a couple of them on his arm and tummy.

I've been having fun experimenting with eggless baking, believe it or not. Baking has never really been my strong suit in the kitchen, probably because it requires much more precision than I really have patience for, given my inclination to improvise. But this eggless thing, it's sort of a challenge to me. I'm figuring out the science behind the recipes, discovering why the eggs are there, and then working on substituting other things.

According to some of my research, eggs really are far less necessary than a lot of recipes would lead you to believe. In fact, something I read suggested that oftentimes eggs appear in recipes out of habit, or are included because they are a cheap form of protein, and can actually just be left out altogether. This is of course true in something like a meatloaf, where as long as you have enough moisture in your mix, you really don't need the egg to hold it all together, but apparently is true even in some baking recipes.

Also, apparently you can tell what the purpose of an egg is in a recipe based on how many of them are needed. If it calls for one egg, it's probably just a binder, holding things together. In that case, you can substitute something like applesauce. If it calls for 2 or 3 eggs, it's probably a leavener, helping things rise. If that's the case, there are several suggested substitutions, things like baking soda and vinegar. Or, you can buy this vegan egg replacer (not egg substitute, like Egg Beaters, those are made out of eggs, just without the cholesterol, etc.) made by a company called Ener-G. It's some sort of potato/tapioca starch something or other, a powder that looks like cornstarch and you mix with water and add in instead of the egg. More than 3 eggs in a recipe, you probably can't make it without them.

We really don't use eggs all that often in our house. J. doesn't like to eat things that have eggs as their primary ingredient, as they often do not agree with him. (So, I'm not going to take ALL the blame for passing along these food issues to N.) But I do make a batch of muffins almost every Saturday and Sunday morning. Nothing fancy at all: I like the cheap Jiffy brand mixes, which of course are not all that good for you, but require you only to add an egg and some milk. A lot of the other pouch type mixes already have the egg included, so are obviously off limits for N. I started my experiments with these muffins.

One morning, I made one batch just omitting the eggs, and another batch using the Ener-G. Both actually came out looking like regular old muffins. The Ener-G ones were a little whiter than normal, but the others looked just like they usually do. Verdict? The completely eggless ones were dry and crumbly, though not inedible. The egg replacer ones were just fine, in fact, maybe a little softer than normal. I've been making them this way ever since. I may try a batch using applesauce, I just keep forgetting to do it.

Then, as a practice to see whether or not a real cake could be made without eggs before O's birthday, I made the bunny cake pictured above. I made it from scratch using regular all purpose flour and the Ener-G egg replacer. Here's what the cakes looked like before I made it into the bunny: 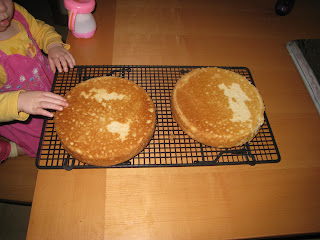 They definitely didn't rise quite as much as cake mix usually does. I decided to try it from scratch rather than using a mix because the directions on the egg replacer said that it works better that way. Who knows? One website suggested that when cooking with this replacer, you really need to use cake flour, because it's so much lighter than all purpose. I didn't have any on hand, but may try that out. The cake itself tasted okay -- pretty dense, not fluffy. J. compared it to the taste of pancake batter. Nice.

Anyway, verdict is, I won't be using this recipe to make O's birthday cake. He deserves a real cake for Dinosaur Land. Instead, I'm planning to whip up a additional batch of cupcakes for N. to eat on that day. I think I'll decorate them with pretty icing in honor of my mom's birthday, which we'll also be celebrating this weekend.

I'll use a mix from Cherrybrook Kitchens, which is a company that makes allergen free baking products. All of their things are egg and nut free, and they even make some gluten free products. They're expensive, and the cake mix only makes enough for one layer, so I don't see this as an all the time alternative, but they do seem to taste good. I made some muffins from one of their mixes, and I thought they were delicious. So did N. However, O. did not like them because, get this: they had chocolate chips in them. You tell me, what kid doesn't like chocolate chips? Mine.

The most recent of our egg-free baking happened yesterday when I resurrected a recipe I hadn't done in a while, though I'm not sure why. You simply mix a box of cake mix and a can of pumpkin, plop that into muffin cups (I used cupcake liners because they get pretty mushy and seem to come out better that way) and you have a relatively healthy snack/dessert. I added a little water this time to make them easier to mix, but I'm not sure you even need it. Ours were chocolate this time, but I've heard if you mix them with a spice cake mix they taste a lot like pumpkin pie. I would say the end result is less like cake, more like a brownie, but not as dense. They're pretty yummy, though, and the kids enjoyed helping make them. Word to the wise, though. The batter is super sticky, and not so fun to remove from the fronts of your cabinets after your 19 month old smears a palmful across them.

So there you have it: our foray into eggless baking. Going pretty well so far. I'd say the only place I'm truly missing them is in french toast, which had been on my standard rotation of meals to throw together when J. was traveling, one I knew for sure both kids would eat. I don't really see how I can make that without eggs, but I'm willing to hear any and all suggestions on that front, or on any baking/cooking experiments you've tried lately.
Posted by E... at 3:04 PM

I recently came across a site called godailyfree.org. It has a recipes section that is for dairy free recipes but also has dairy free + egg free, vegan, soy free, etc.

I really enjoyed this post and learned some stuff too!

I will vouch that spice cake mix and solid pack pumpkin make a delicious combination. I have added diced apples and dried cranberries to this concoction with pleasant results. It does kind of suck dealing with the sticky batter, but the end result is good, I think.

I'd love to read more posts on these culinary adventures.

Interesting! I always take recipes to be gospel and fear for disaster if I modify them in any way. You might say I am a timid chef. I have tried substituting applesauce for eggs in cake. I would not have known the difference if no one had told me.

I am definitely going to try the pumpkin and cake mix! I'll probably follow MEP's suggestion and mix in some apples and cranberries, two of my favorite things.