They Better Be Some Great May Flowers...

It's another cold and rainy Monday here in Cincinnati, though we had half of a beautiful weekend again. So here are some of the promised shots of O's little garden.
For perspective, here's the front door. Garden is to the left of the porch. J's concrete block creation blends in pretty well, I think. 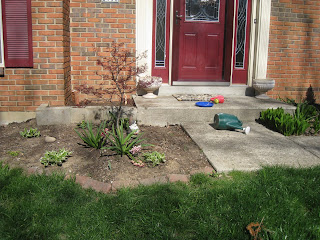 The packets of seeds we bought said "for small spaces" but I'm not sure they meant THIS small: 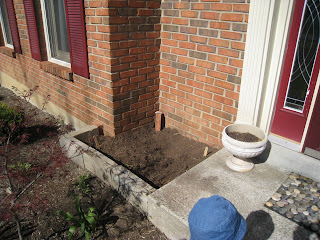 I don't think you can see it as well as I had hoped with this shot, but the lettuce is already coming up! O. wrote the label stick himself, after I spelled each letter in the air for him. Now, if we can just keep the dog from sleeping in here, we'll be fine. It is one of her favorite spots to dig/wallow, but she abandoned it last year after I moved my herb pots in. 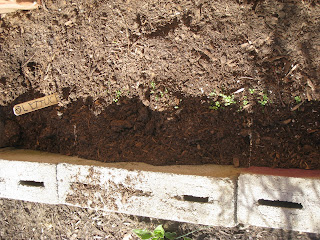 And here's a shot that O. took himself of one of my surviving tulips. 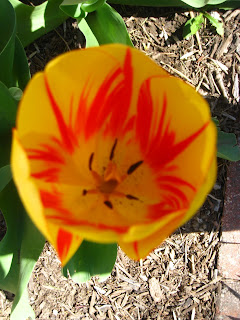 The hyacinths are over now, but O. had J. help him cut a couple one afternoon. He brought them in the house to me, and I thanked him profusely. He shrugged, headed back for the garage door and said "That's just what little kids do for their mommies in springtime."

Oh, and lest you think N. isn't into the outdoors projects, here's some proof she can stir up some springtime magic of her own. 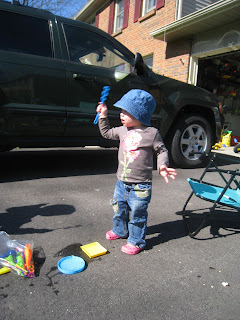 "That's just what little kids do for their mommies in springtime." He's killing me with that! Awesome.

I think J's concrete block creation looks awesome. Bub and I have purchased some seeds, but that's the progress of our garden so far. I may need to contact you for some tips.

Excited to see your May flowers.