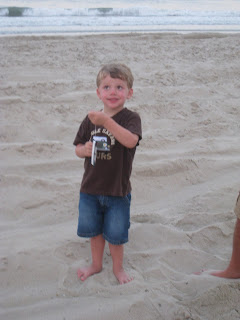 O., flying his new pterodactyl kite
We've been quite the Traveling Wilburys lately, in and out of town most of the month of June. Last week, it was the beach trip -- a week in the Outer Banks with my extended family. There were 22 people all in one house for the week, which sounds like craziness, but really is just like always having company and entertainment for your children around. This is year four for this family reunion.
This year we found a place that was accessible only by four wheel drive vehicles. No paved roads, just a four mile drive straight up the beach. This made for some interesting experiences on the beach -- like did you ever think you'd let your children set up their sandbox on the road? Each day, as the beach got smaller and smaller with the rising tide, we tried to create barricades of chairs and boogie boards to force the traffic higher on the beach. One morning, a crazy local garbage collector drove his pickup right through our barricade, sending the boogie boards twenty feet in the air. Thankfully, I wasn't on the beach when it happened, but I believe there was some swearing and fist baring to which we also wouldn't normally expose the children.
The northern reaches of the Outer Banks, NC are famous for their herd of wild horses. Our beach house this year was smack dab in the middle of the tour route to see them. Each day we'd watch the jeeps and big blue school buses outfitted with beach tires drive past and slow right near our rented property to point out the horses. A herd of about nine, including a very young colt, grazed on the dunes all around our place at different points of the day all week.
It was a week of no schedules except rotating from pool to beach to snacks and meals. We couldn't get O. out of the pool once he realized that he could float around at will wearing his life jacket. But then he discovered jumping waves in the surf, and spent hours pretending he was a dog and then a fish leaping over the small waves.
N. was a sandbaby all week: smoothing and shoveling, scooping and sifting. She had a lineup of buckets and watering cans at all times, often picking up all of them at once in big bouquets, afraid that all of this fun just might disappear before her eyes. 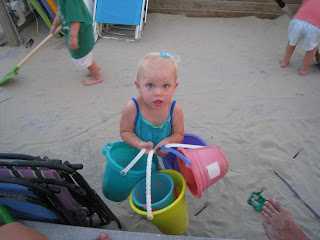 Because the area we were staying in was so undeveloped, the sand dunes kept encroaching on our walkway to the beach. My cousin and his girlfriend spent much of the first two days shoveling out the crow's nest overlook to the beach (I'm pretty sure I saw her holding the shovel more often, come to think of it...), but the wind kept blowing more and more back each day. I kept telling O. to stay on the path, and off of the dunes because we needed to protect them. He wanted to know why, so I told him it was to protect the environment and to keep the sand on the beach. Then he wanted to know what the environment was, so we had a great little talk about ecosystems, etc. Al Gore would have been proud. The rest of the week, whenever someone in our group tried to take a shortcut that would save them a little trudging up a hill in the glaring sun, O. made sure to remind them to "Stay off the doom!"
My camera fell out of my pocket one evening (the picture of N. with her buckets was the last one I took), got buried in the sand and rained on. My dad found it for me the next morning, and while we were able to rescue the memory card, the lens seems irretrievably impeded by grains of sand. Doom, indeed.
The other tragedy of the week unspooled at bedtime the first night at the beach house, when Charlie could not be located. Charlie, my son's best friend of the stuffed bedtime variety, he/she of the indeterminate gender and wearer of N's hairbows on the ears. He was not in the car, not in the luggage, not anywhere in the mess we had already made in our bedroom.
I started to feel a true sense of panic and a sting of tears in my eyes when I realized he was probably back in the Virginia hotel room we had stayed in the night before. J. told me to keep a lid on it in the hopes we might be able to get O. to sleep without realizing the possibility of Charlie being gone for good. I barely slept, and when J. finally talked to the head of housekeeping the next morning who swore she was holding Charlie in her hands and was going to put him in a locker to wait for us to pick him up on the way home, I literally wept with relief.
Each night when we put him to bed at the beach (with his sister's stuffed dog acting as poor substitute), he implored "Why did we forget Charlie at the hotel?" and "What if Charlie is missing me?"
I can't tell you how many times I've thought we should have a double of Charlie, and have never made the requisite Ebay search. I implore you all right now, always make the last sweep to check for missed items, or maybe even create an ID tag for the best loved friends and blankets: I'm seriously contemplating it.
When we stopped back at the hotel on our way home, J. went in to retrieve Charlie by himself to try to avoid a tremendous scene. He says he doesn't want to even know what his face looked like when the front desk clerk returned holding aloft a tiny blue dog that looked NOTHING like Charlie. Fortunately, a return trip to a safer holding location brought forth the true dog, and all was right with the world.
Charlie is now back where he belongs, being swung by his ears around our family room, sporting the hairbow color of the day, and snuggled right next to my son at bedtime.
It almost makes it okay not to be waking up each morning to the sounds of waves breaking on the beach, wind ruffling the manes of horses, and happy company preparing for a day of vacation. 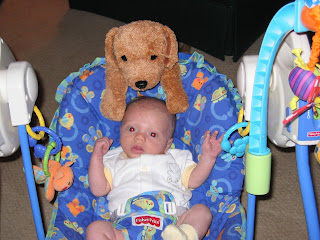 Charlie's been watching over O. since the beginning... 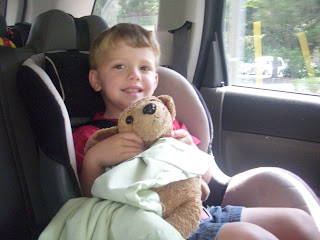 What a wonderful trip, minus the temporary separation from Charlie and the doom to your camera. I can only imagine J's face when the fake Charlie was held up.

I really like your new background, really want to hear what you thought of Sing Them Home, and am going to Amazon to find out what The Last Thing On My List is about.