On the First Day of Christmas...

I'm bringing back the "post a day until Christmas" tradition here at Small World, hopefully chronicling our advent activities. I'm not sure I have enough clever ideas and fun to fill up the days, and there's a good chance this year's events will be very similar to last year's. But that's what tradition is all about, right??
We started off the season by trying to get a photo of both children in festive garb appropriate to send out in a Christmas card. I gave up trying for a professional portrait two years ago after all three of us left the studio in tears. We were semi-successful last year at home in front of the fireplace, so we began the day with both kids sitting on a chair in front of the Christmas tree.
When that ended with both O. and N. in time out (after they started performing leaping face first dives onto and off the chair), we decided that we could probably get something decent on our trip to the live nativity and conservatory. They tend to behave decently in public.
We arrived at the conservatory, and O. remembered being there for the butterfly show in the spring. A little boy was crying as he exited the building, and O. said "Mom, I bet he touched one of those cactus in that one room."
Several other families apparently had the same idea, as there were clumps of velvet clad children standing in front of every cluster of poinsettias. There was even a group in matching polar bear pajamas ranging in age from 6 months up to 12 years. The echoes of "Look Here!" "Say Cheese!" "Do You Want Some Fruit Snacks??" rang out throughout the greenhouse. I gave up hoping for smiles, and wished they would both just look in the direction of the camera.
As we left the building, O. was the one in tears, because we declined to buy the coloring book he spotted in the gift shop. He didn't think it was too funny when I told him the kids coming in were going to think he touched a cactus.
When I plugged in my camera at the end of the day to download and start sorting through the shots, there were 77 images.
You would think with that many pictures to choose from, there would be at least one or two with card worthy shots right? You would be wrong. 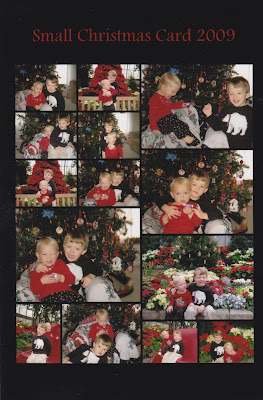 We got some okay picture for our card, but could not get a single picture of the boys together (which is what I had hoped to achieve).

I was all set to illegally scan a professional family photo from the summer, but Costco's website said they required a signed authorization form from the person placing the order and the photographer. Freaked me out.

I love that you threw the cactus line back at O! Too funny!

I don't know what software you use, but Photoshop Elements has a tool that allows you to merge photos. So if one person has their eyes closed or not smiling, you can merge the photo with another where they are. I haven't used it yet, but it's supposed to be pretty handy.