On the Ninth Day of Christmas...

...we decided to put together our gingerbread house!! The kids were very excited about this. Building, cooking, cookies and candy are all high on their lists of favorite things. They even asked to put on their aprons to be properly attired for the event. 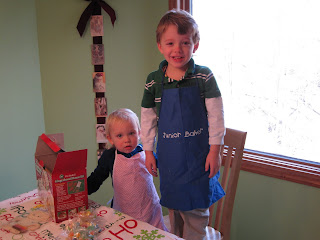 Look at us all decked out and enthusiastic. And wow! Is that an actual photograph of me??? Thanks, J., for taking it. I notice you slipped off to your office pretty quickly afterwards, though. Did you pick up on the feeling of foreboding? 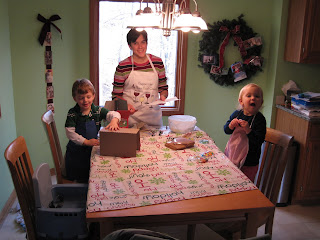 Because here's the thing. I told myself I was going to LEARN from last year's gingerbread escapade.
I reminded myself NOT buy the pre-assembled version of the kit. Because when we did that last year, it was broken, and we had to put it back together anyway. For some reason, that's the only part of the difficulty I remembered.
So, when I purchased this year's, I wasn't thinking "Don't buy the WILTON one. It's the one that requires you to be a cake decorating EXPERT, not a mom trying to entertain preschoolers." That's what I SHOULD have been thinking.
Instead, I was thinking. "Nine dollars? Cool. I have a Jo-Ann's coupon. That will work. It's not the pre-assembled one, so it won't be broken this time. And how on top of things am I, buying this in early November? I basically rock as a mom."
I bought the Wilton, unassembled one. The one that not only requires you to glue the house together with icing, also requires you to make that icing out of the powdered sugar bag they give you labeled "icing mix."
This year, I followed the directions as written, making my icing a toothpaste consistency, remembering that I didn't want a pool of thin icing all over my table. Well. Toothpaste doesn't exactly flow out of a decorating bag. Especially one your son has threaded through the included decorator's tip. Although he did widen the hole for the icing in the process.
Also, when you have to assemble it yourself, you're supposed to wait three hours or so for the icing to set before you can actually do the fun part of sticking the candy on.
Oh, the other parenting fail? All of that candy is candy that was "Made in a Facility that Processes Peanuts." Says so right on the outside of the box. Good one.
By the time I got to this point, the kids had long since lost interest and were busy hiding in their tent coloring with the non-washable markers. 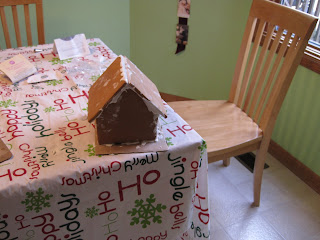 I set it aside, and still had to hot glue it together because half the roof fell off an hour later.
Here's the beauty part, though. On that November trip to Jo-Ann's, I had also picked up this adorable little gingerbread house. It is not edible (therefore not allergen laden). It is made of foam. And wonder of wonders, they are the foam pieces with the sticky stuff on them, so we didn't even have to use glue to construct it! They actually worked together reasonably well to make this little guy. 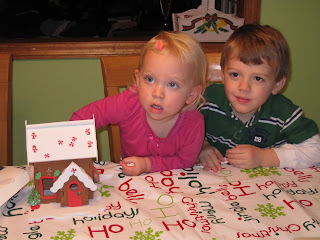 We did eventually put the candy on the real house. And I let them go to town the next day eating the candy. I know, I know. I shouldn't have let Little Peanut eat the candy. But it would have been awfully cruel to tell her no way, you cannot eat that candy right in front of you, none of it had actual peanuts in it, and the epi-pen was on standby. 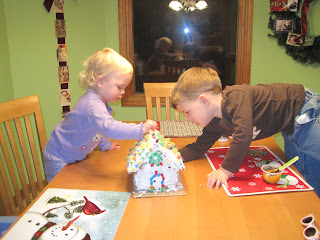 I can't imagine trying to construct a gingerbread house. Oy. Just thinking about it puts me in a hot sweat of frustration.

Okay, I meant construct a gingerbread house WITH MY DAUGHTER. She's the frustrating element here. Although, in fairness, I'm no master pastry chef.

No gingerbread houses around here either. You are a GREAT mom!

Someone on facebook today shared this holiday craft/cooking project: take a sugar cone and turn it upside down so it's a Christmas tree. Cover with green icing and then candy for ornaments. Too late for me to do anything with that tip, but it sounds pretty painless and kind of cute.