On the Sixth Day of Christmas... 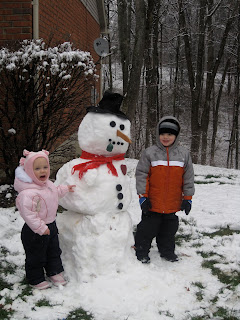 ...We got our first real snow of the season. Apologies for those of you getting hammered with the blizzard in the east, and for those of you in the north already sick of snow. Here in southwestern Ohio, we are as likely to get ice as anything else. So real, stick-together-make-snowballs-and-snowmen-snow is something to celebrate!
Here's the first snowman of the season! (Our only one last year came in March, I think!) However, Frosty didn't last long. O. hauled off and knocked his head off about one minute after the above picture was taken.
J. told him Santa probably had just moved him onto the naughty list, so I guess he decided to go for broke and play king of the mountain. 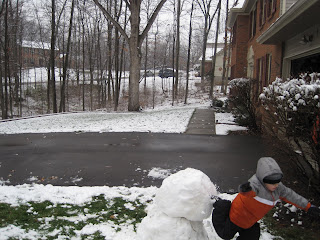 Mr. Snowman got the last laugh, though.

That's a pretty impressive snowman. We only had a dusting here, not that I'm complaining!

I was wondering if you guys had gotten any of this storm. Glad you got enough for a snowman! Even if it didn't last very long.