On the Third Day of Christmas...

The Small children went to see Santa. Actually we've seen Santa around a lot of places this year. Is it me, or is Santa a lot more mobile these days than when I was a kid? I keep waiting to discuss "Santa's helpers" with O., but that conversation has yet to come up.

Last weekend, my parents volunteered to take the kids to the train display at Cincinnati Museum Center while J. and I went to the biggest rivalry game in the city: the basketball game between Xavier University and the University of Cincinnati, otherwise know as the Crosstown Shootout. We were pleased to see XU emerge with another win. However, it is official: we are old. When the second overtime looked imminent, we actually didn't care if the Bearcats took the win, we were just really hoping to go home and get some sleep.

Anyhow, while we were at the game, the kids and Grandma and Grandpa looked at the trains, and Santa happened to be visiting. N. told Grandma that she wanted to go "hug Santa." So, they waited in line, and my dad walked her up to him. 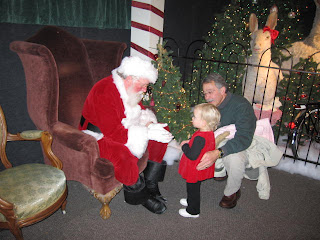 Santa made her feel so comfortable and welcomed that she had no problem sitting up with him and having a chat. I think she told him she wants him to bring her some candy and farm animals. 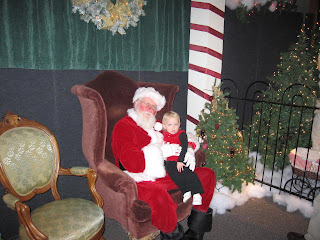 O., on the other hand, was not feeling quite so friendly. However, it was clear he was interested in talking to Santa, because he stood just beyond the velvet ropes taking in the whole interaction with his sister. When Santa recognized N's brother standing there, he got up and came over to talk. 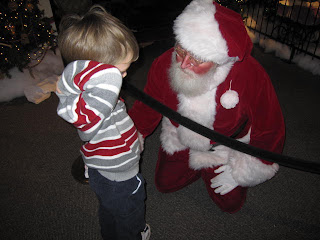 My mom tells me they chatted for a good long while. O. kept his arm just like that the whole time, just as he does anytime he's particularly nervous. 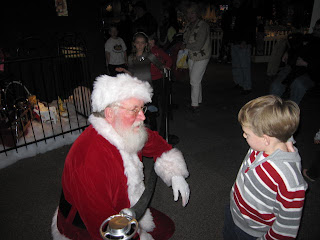 The next morning, O. was very excited to tell met that Santa told him he thought he was going to be very excited about what he found under the tree on Christmas morning. Maybe even some dinosaurs!!

Does Santa know exactly the right things to say to kids, or what??
I should mention here that there was no photo booth set up anywhere near Santa's chair here, no teenager dressed as an elf, nothing available for purchase. Just Santa having a nice long chat with each child, making sure he knew exactly how he could make each one's Christmas as special as he could.

When O. wrote his letter to Santa, he started off by listing his top desires this year: a racetrack and the Triceratops Dinosaur mountain. He also added that he has always wanted a big truck that he can drive himself, and he wanted Santa to know that even though his Mom says Santa usually only brings toys that make kids get exercise and use their imagination. He also told Santa that his sister would probably like a baby and a pony, and he thinks Santa should bring her her own pink rock so that she doesn't keep trying to take his.

When I mentioned that perhaps he should ask Santa a few things about himself, since just asking for toys wasn't very polite, he added a question to Santa wondering how reindeer really do fly. For the next few days, he kept asking me when he would hear back from Santa.

Luckily, Santa does know exactly the right things to say to kids, because shortly after, O. received a great video message directly from Santa. It came from the Portable North Pole, and in it, Santa shared with O. the secret of how reindeer fly. (I won't divulge it. Santa asked us not to.) If the child in your life hasn't gotten such a message yet, you might want to head on over to this website to see if there's one waiting. I got one too, and apparently I've been naughty. But Santa says I still have some time.

Nary a Santa in sight around here, and I have not made any plans to get the boys to meet the jolly guy, though I should. Bub's almost 4 and he's never gone to see Santa. What's wrong with me?

I love that the Santa was just there to chat and listen and that is wasn't a huge profit-driven factory type situation. That warms my heart.

Thanks for the tip on the messages from Santa. I can at least deliver one of those!

I doubt you've been too, too naughty.

I just wanted to say thank you for the wonderful comments about CMC Santa! WE all love him and believe that he is the best Santa around! He loves what he does and it is all volunteer! Thank you for your blog and i'm so glad your kids enjoyed their time at Holiday Junction. Merry Christmas