It had been a while since I had uploaded pictures from my camera to my computer, and I finally got around to it this morning. What I found was a collection of the same kind of pictures I always seem to take in January -- shots of the kids wearing mismatched outfits, climbing on the furniture, posing with block towers, and generally goofing around. There was one whole series of the two of them showing me their (clothed) backsides. There was even this adorable one: 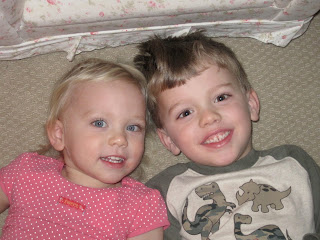 My new theory on taking decent photos of the two of them together is that they have to be lying on the floor.
What was the impetus for the download today, you may ask? Well, I took a few shots of N. this morning to document her most recent injury.
Last evening, in those dangerous last fifteen minutes before bedtime, O. and N. were pretending they were horses. They were being quite cute about the whole thing, procuring tupperware bowls to eat pretend apples and hay out of, building stalls out of couch cushions, and whinnying and rearing their hooves back. Of course, the pretend play could not end there. No, it had to progress to horse races. And yes, my children have been to the race track. They actually love it there.
On about the third lap through the family room, living room and kitchen, N. tripped and did a full fledged header into the coffee table. Luckily, she missed her mouth, but took the full impact to the nose. I screamed, O. stood frozen with fear, and J. swooped in to grab her and get ice on it.
She seems to be fine today, though she's more than a little swollen, and a little bit black and blue.
Here's the shot I took, which does not quite show what it looks like in real life. 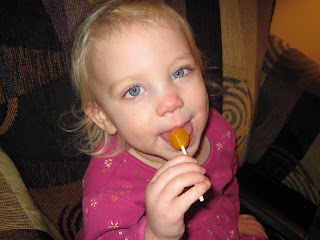 In actuality, I think this is a little more like it: 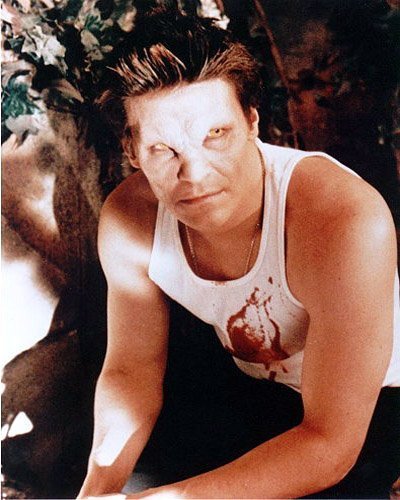 Just kidding, though perhaps that's too bad. I hear vampires are pretty big right now, so maybe we could get her a gig on the next Twilight flick.
What a week it's been...
Posted by E... at 2:49 PM

Okay, I laughed out loud when I scrolled down to the Angel picture! Love the picture of the two of them. I have a terrible time getting good pictures of Sophie, I can't imagine trying to wrangle two.

O and N together are just adorable. Love that photo.

It took reading Cara's comment for me to remember that that guy was named Angel . . . now it all makes perfectly clever sense.

Hope N's nose is healing nicely and that the snow is not driving you guys nuts!

I never thought about putting them on the floor for pics, though I doubt Drew would even stay still there. Drew is a walking disaster. Love your post about Cinci. I'll have to do all of that stuff in our summer visit. Hope we can get together with the kids sometime.