You Want to Eat The Cake Too??

Last week was birthday week for O. (Yes, we do birthday weeks around here. One day simply isn't enough for all the celebrating!). He had a fabulous time wearing the birthday hat at school, eating mini corn-dogs at dinner out with Grandma and Grandpa, and sampling four different birthday cakes.
I personally only made two of the birthday cakes, and as I did, I held my breath until I discovered what the cake disaster might be this year. I've been making birthday cakes for my kids every year since their first birthdays, and when it comes to O.'s, I don't exactly have a great track record. There's been some sort of cake related debacle every year.
For his first birthday, it was the cake that was supposed to be a bathtub with floating rubber ducks in it that mysteriously ran liquidly all over my oven, and refused to set up, remaining a strange gelatinous consistency. I say mysteriously, but it was really only a mystery until I realized that I had not put any eggs into the batter at all. Since this was before I learned any of my eggless baking tricks, it didn't work out so well. I had to remake that one.
The next year, I spent a whole afternoon making a train-shaped cake, with mini-loaves decorated to look like each different type of car. It turned out really well, and I was exhausted by the end of the process. We left the cake on a card table in the dining room and went out to dinner. We returned to find half of the cars inhaled by our hungry dog, half-chewed pretzel logs from the timber car and all. Luckily, I had made a few extra mini-loaves, but an extra trip tot he grocery store was required to replace the icing.
You'd think at this point, that I'd have given up the next year and ordered a cake, right? You wouldn't know me very well. Give me a situation where I've encountered obstacles or difficulty, and the stubborn side of me rises right up. I'll prove I can do it once and for all. Ordering a cake would just be some sort of admittance of failure, and I'm a little too Virgo for that. Also, sometimes being a stay at home mom brings out this sort of craziness in you, where you think you need to have some sort of concrete proof that you don't spend your day eating bonbons or whatever. Like my good friend who told me that when she was raising her kids, she started making her own oxford-cloth buttondown collared shirts, spending days on each, when she could have just saved umpteem hours and dollars by picking one up at JCPenneys.
So, for O's third birthday, we went for the Diego/Jungle themed cake. Luckily, this one involved no elaborate carving or decorating. It was just a sheet cake with plastic animals plopped on top. No problem, right? The cake turned out just fine, got iced no problem. O. even helped me sanitize some of his toy animals in the kitchen sink before we put them on top together. Half an hour later, he had hives the length of both arms. Obviously an allergic reaction to the Spic and Span we used as a cleaner, and I was dosing my boy with Benadryl the day of his own party.
Last year, the problem was relatively minor, just a big crater that developed in the center of the dinosaur cake and had to be filled with icing multiple times.
It's become a bit of a running joke: what's going to be the cake disaster this year? Why give up making the cakes when you have such suspense awaiting you?
This year, as mentioned, we were more on a birthday week sort of plan. J. was out of town on O's actual birthday, so we were saving the big celebration for the weekend. But I had to make a birthday treat for him to take to school. He requested Jello Jigglers shaped like dinosaurs, which should have been just fine, except that I found one of the four required boxes of black cherry gelatin unopened in the sink after I slid the pan into the fridge. They fell apart as soon as I tried to cut them out. You guessed it: another run to Krogers in my pajamas for do-over Jello.
At the last minute, I decided he needed some sort of cake on his real birthday, and I had NO interest in returning to the grocery store, so I smeared a log of cookie dough into a pizza pan and made him a chocolate chip cookie cake. O. loved it, and couldn't wait to share some with his dad. Except the dog knocked the pan on the ground onto my freshly mopped floor the next afternoon.
So, it turns out that the key to defeating the birthday cake jinx is to run some preliminaries and have your stumbling occur there. Because on the party day, when it came time to make the dinosaur/dragon O. had his heart set on from the Family Fun website and I actually believed was well beyond my meager cake decorating skills, we had NO PROBLEMS. 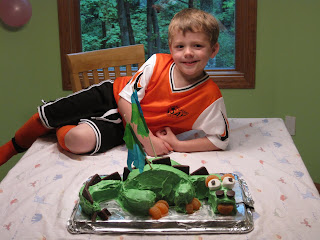 I think he was pretty pleased, even after a long day full of a dinosaur party at the museum with his buddies, and a soccer game played with a nasty cough/sinus infection and only one sub, and far too much excitement over a pile of presents.
Posted by E... at 8:49 PM

I'm thinking this birthday week thing sounds like a fantastic idea ... Wonder if my husband will make me a cake (or three)??

PS: That photo and dinosaur cake? Both so amazingly sweet. (And who needs Jello anyway?)

Your dinosaur cake kicks serious booty! And how cute does O. look posed behind it?!

I have not yet baked my children's birthday cakes, but that's only because my mom comes to town and does it for me and really takes pleasure in it. I totally get you on the SAHM craziness . . . the reason I always sign up for "baked good" or whatnot for preschool parties instead of cups or napkins.

That cake is amazing! I totally admire your determination!

I am a firm believer in making the birthday cake at home, but mainly because I can't stand the taste of store-bought cakes. And my kids love helping me decide on their theme. Your disaster stories have mine beat, but I'll share one:

When Elijah (my first) was turning one, he loved Pooh. Of course, I had half the country invited for my firstborn's birthday, and decked out the house in Pooh decor. I spent SEVEN hours on the cake, getting the colors just right and using those tiny stars of icing to fill in each area. It turned out perfect.

So perfect, that everyone assumed it was a bakery cake and never said a word. Until my mom said, "Is this the cake you made?!", to which I replied "YES". Finally, someone noticed! Not that you do it for the glory, but you do want a LITTLE bit of credit, right?

I'm gonna have to show Gabe that dragon cake. His birthday is in August. Do you have the directions? Could I have them? Pretty please?

ps. I think you get bonus points for having birthday week and so many homemade treats when you're doing it while gestating. Just sayin'.

I'm a big supporter of the "Skip a Birthday Party" system at least once per kid. So far I haven't received favorable comments from the kids.

I am super impressed with the dinosaur/dragon cake! It looks awesome!

The cake is fabulous! All of those past speedbumps were just practice, building up to this year's triumph!

I, too, have had my share of baketastrophes. My perception of my skills far exceeds my actually abilities. I keep saying I'm going to take a cake decorating class. I need to quit talking and just do it.