After a bit of an absence, it appears my Girl Fearless is back.
N., who walked at 10 months, and then basically moved right on to running after her brother, used to always be my child that I worried would get seriously hurt because she simply had no sense of what was dangerous or beyond her abilities.
Last summer, before she was two, I was constantly hauling her off of the ladder on our swing set. She got four stitches in her upper lip because she was running at top speed on a boardwalk by the lions at the zoo and tripped. As soon as we found the ladybug lifejacket for her, it was impossible to get her out of the pool, except so that she could jump in again.
Over the winter, though, my little daredevil became a bit of a shrinking flower. When we'd go to the indoor playset place, she wanted nothing to do with anything more wild than a baby swing. Wouldn't go anywhere a slide or a climbing contraption. And although she'd go into a trampoline for a few bounces, she would only do so if there were no other children anywhere nearby.
Anytime we went to friends' homes for playdates, she wouldn't leave my hip or my lap. It was as though I had acquired a new shadow. I understand this timidity -- it's certainly more my own tendency. I also get that there's probably some connection to her awareness that she won't be the baby of the family for too much longer. I have tried to be patient with this new version of my girl, hoping that it was just a phase she would move through. Or at least that it would not always involve her acting like human velcro.
We've seen some glimpses this spring. The tumbling class when she actually joined in with the "pile up on top of the tumbling mats" activity with the bigger kids. And the visit to the inflatable place when she went down a giant slide as long as her brother and ten year old cousin accompanied her.
But as of our trip to my sister-in-law's lake house over Memorial Day, Miss N. seems to have gotten her brave groove back. Not only did she spend extended periods of time out of my arms' reach and even eyesight playing with the crowd of cousins, but she also quite literally jumped back into the water.
Here she is, jumping right off the diving board on the end of the dock, into water that is over her father's head. 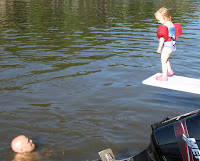 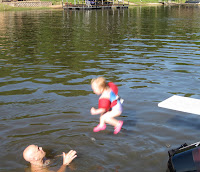 And then, she was off to run back around to do it again... 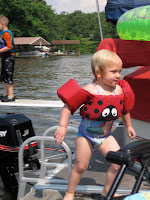 We couldn't get her to stop repeating "I jump off diving board??" She went down for her naps saying it, and woke right up after requesting her life jacket. After a while, J. got tired of getting dunked everytime she jumped to him. So he decided to just let her go under once, figuring she wouldn't like getting her entire head wet, and would cool it for a while. Not so much.
After that, we just started to let her jump in on her own and paddle over to the boat ladder. Hours were spent in this manner.
Oh, and she also wanted to go on the big inflatable tube behind the boat. We finally convinced her that her dad had to go with her. 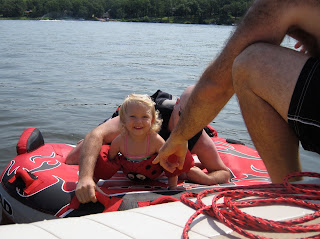 oh my gosh, are those the cutest pictures or what?? I loved this!

and thanks for the visit...

Yep, she and Sophie are two of a kind! Our fearless little girls.

Where did you get that life jacket? We're going to the beach next month and we need something like that.

Welcome Back, Girl Fearless! Can I say how cute GF is looking with those long curls (!!!!) and that huge smile!