Hold the Peanuts and Crackerjacks, please...

J. is in St. Louis this week, and will be attending a Cardinals game with customers today. He asked me this morning whether or not he should wear his Reds hat to the game, and I was all "Oh, St. Louis people are really nice. Even though they're competing for first place, I don't think you'll get any abuse."
Then he reminded me of that big bench clearing fight at the Cardinals/Reds game last week, and I said "Oh yeah, maybe you should just not."
Anyway, here in Cincinnati, the Redlegs are doing well, and that's a good thing for the city. We love our baseball around here anyway (Opening Day is practically a holiday, parade and all), but it's always more fun to have a winning team. We didn't make it to a game at all last year, so it was on our list of things to do for this summer for sure.
We took the kids to a game in July. I uploaded these pictures back then, but never got around to writing anything to go with them, so here we are!
When I was a elementary aged kid, there was a program called "Straight-A tickets" and for good grades (I don't think it actually required all A's), you got a voucher from the Reds organization for four free tickets to a game. I was always good for a set of these each year. The family story is that we'd all go to the Reds game "my treat" and I'd sit in the red seats reading a book throughout the whole game.
I don't take a book to the game anymore, though I admit I still think it is not a bad idea. Baseball is not exactly the fastest paced event in the world.
Taking two small children to a sold out baseball game on bobble head night pretty much precludes fitting in any chapters, though, and there were a few times I wished we had planned this outing as a date, rather than a family.
Things I don't enjoy about baseball games? 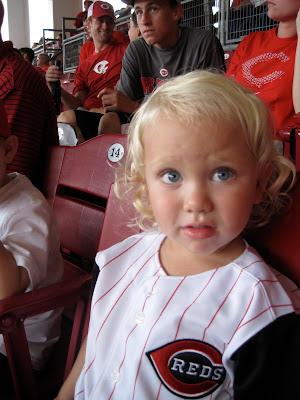 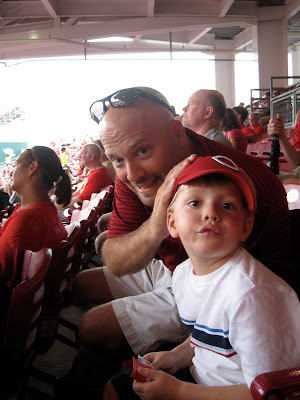 But it was certainly not all bad. There are many things I DO love about being taken out to the ballgame. 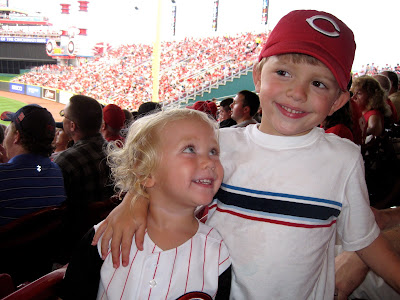 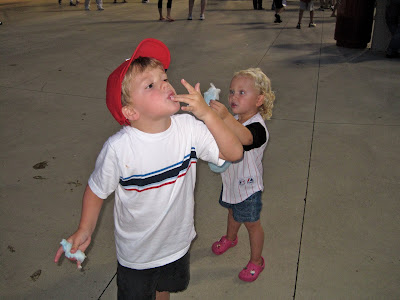 For the record, I wore the hat. Go Reds!

What I love about this trip to the ballpark are the pictures of two cute kids! What I didn't love about a trip to ballpark when O.was little; was going when it was 103 degrees! Gma

Great post! I loved all the photos and observations.

Some thoughts:
Cardinals fans can be totally obnoxious. I know because I live with one. Good thing the Reds have been kicking butt since the brawl with the Cards.

Had not thought of the allergy dangers at the ballpark, but that totally sucks.

I also enjoyed a good book at the ball game, though I made an effort to watch the game while the Reds were batting and of course was willing to stop reading when it was time for snacks.

I love the vibe at the ballpark and never pay a bit of attention to the game itself. I love people watching and hot pretzel eating.