We reached the end of our summer countdown over the weekend, opening our last envelope on N.'s birthday. Today, O. started kindergarten, making the beginning of a new school year official, and signalling the start to many new things in our Small World.
I look at pictures of the two of them on these milestone days, and can hardly believe how much they've changed during these long summer months. It was a glorious summer, full of all kinds of fun adventures and discoveries, and I hope we'll always be able to look back on it as a marvelous lead-up to New Baby joining our family.
I thought one way to really remember who my children were during this summer before they became the oldest in the family would be to celebrate all the things they've learned to do since summer began.
O. learned how to:
N. learned how to:
Is it really possible there's so much more change awaiting us this month? I am thrilled to discover who these two amazing kids are going to become as part of a family of five, and simply cannot wait to meet the spectacular person that is working on becoming their brother. For now, I'm glad I get to take a moment to savor the fantastic people they are right now. 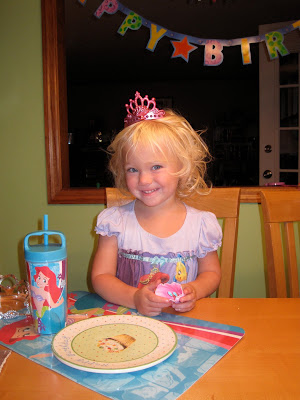 N., my Birthday Mermaid, with her new Ariel loot.
I barely recognize her. Is it possible she changed OVERNIGHT? 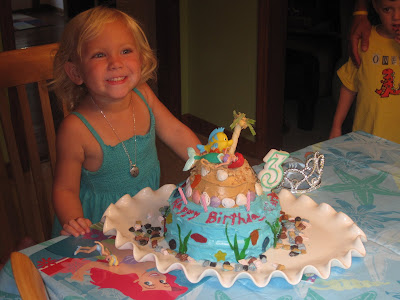 And with the mermaid birthday cake
she's been describing to everyone who'll listen for months now.* 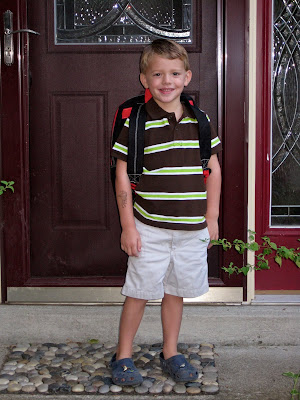 Classic first day of school pose.
Can you believe how eager he looks?
Is this the same boy who I had to peel off of me
even even some days in APRIL
when I dropped him off at preschool? 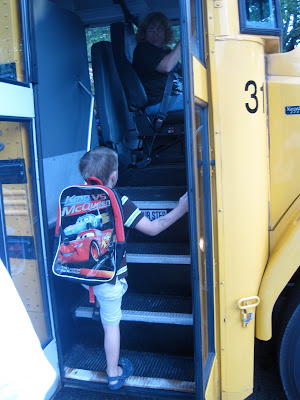 There he goes, off on the bus,
my future sprinting far too quickly
away from me with him.
*Perhaps you remember that I haven't always had the best of luck with birthday cakes. This would be Mermaid Cake #2, after the dog ate nearly half of the first one the night before N.'s party and I had to remake the WHOLE THING. Perhaps I'll learn not to make them the day before???
Posted by E... at 3:22 PM

I adore this post! They look so big! Isabel had an Ariel party when she turned four (did I already tell you this?). Something about that little mermaid, isn't there?

I love how ecstatic O looks with her cake. And WHERE did you get that shell plate?! Perfect!

Where did all of N's hair come from? She was practically bald like two weeks ago. Look at those amazingly adorable blond curls! She's a beauty!

I'm so excited for you as you step into this next phase. All good things.

Your already beautiful mermaid princess gets more beautiful each time you post a new photo -- plus, she just looks so happy! And so grown up! Her list of accomplishments made me chuckle.

I'm trying to imagine how it felt to watch O. step onto that school bus. Wow. I'm so excited to hear more about kindergarten.

Fantastic cake, by the way.

I'm so happy you are helping us to remember all the new and wonderful things that happened this summer.
We can't wait to meet the newest "Small" one.
The caption under O.'s picture brought tears.
Lov, M.

those are some gorgeous kids :-)