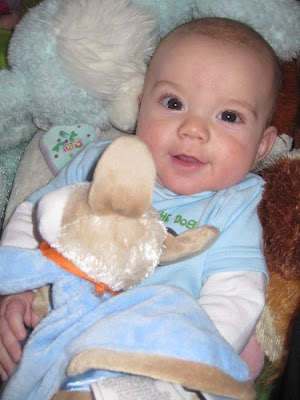 Oh, this little man of ours. Such a sweetheart, but it's been a little bit of a rough month, though. Before Christmas, he was sleeping through the night. What?? He's not a year old yet. I swear, I only ever whispered it, knowing that if I said it out loud it would all be ruined. Sure enough, he started refusing to nap during the day, and I figured that was my punishment. Hah! You think you can gain back some sanity? We'll see how you do with THREE kids that don't nap. Then, he started gifting me with every two hour wake up calls. No fever. I finally took him to the doctor and sure enough, the poor thing had an ear infection. It took another week for him to return to his old smily self.
Now we're just battling nasty eczema, moisturizing at least twice a day and saying lots of prayers that it is only winter dryness, and not some other allergy trigger. This would be much earlier than his sister's bout with similar issues. So far, he's not nearly as miserable as she was at her worst. I seem to be able to keep it relatively well controlled, though it always comes back.
He laughs out loud these days, watching his brother and sister's every move. He wants so badly to hold things and shove them in his mouth, and gets a little better at it every day. He has rolled over twice now, both times seemingly on accident, and hasn't been able to repeat it. He's sleeping in his own room now, for the last two weeks. (One of my experiments to try to get him to please, please sleep, thinking maybe he was getting big enough to wake himself rolling into the sides of his bassinet) In the last two days, he has taken two naps in his very own crib! Mostly, though, he'd rather be on Mommy's hip or in one of my front packs/slings. He prefers to be held face out, to get a view on the action.
Seriously. You don't have to be so happy about growing up so fast. 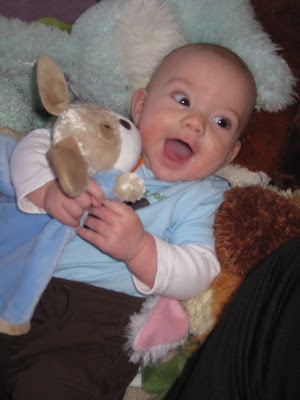 Better watch it, or we'll put you to work. 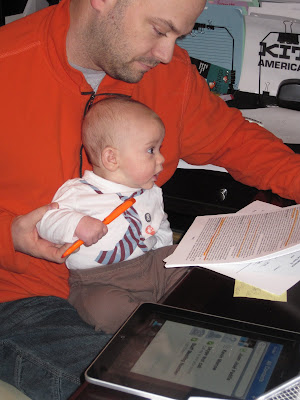 You could use a little exercise for those thunder thighs of yours. 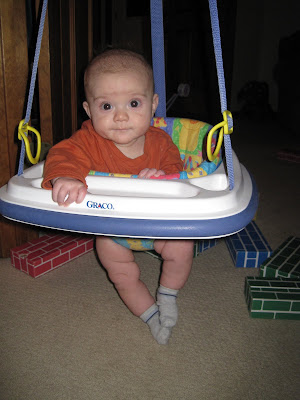 Oh, okay. We'll get out the exersaucer to celebrate this little milestone. 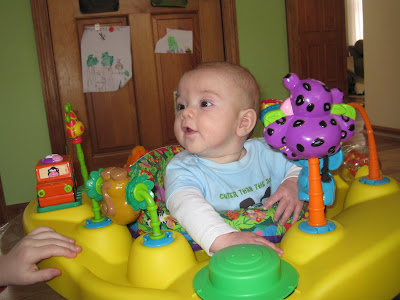 He is seriously so darn cute! Four months is such a great age, cooing and giggling and being so aware of their environment...love it.

What a cutie-pie! Happy Four Months, sweet L.! (And I hope the mystery eczema and sleeplessness clear up soon. For your sake and his!)

This made me smile

He's perfect! I can't get enough of his smiling face.
em

His cheeks! His smiles! His big, bright eyes!

Hoping your days start to feel a little shorter and your nights a little longer!

The picture of him helping daddy in his little tie t-shirt is just about the most precious thing. He's a handsome lad, indeed. I still have his birth announcement on my fridge. They do grow so fast. I was just thinking today how quick babyhood is. It's pretty wild to watch as they become their own people. I'm loving every minute of it, though.