Reviving MEP's genius format for sharing random things that keep circulating as potential posts.
Thumbs Down:
Solo Parenting
J. was gone three nights this week, and I am super exhausted tonight, feeling like I gave far too little quality time to my kids today. Having no business writing this post, but unable to focus on anything else.
The paper towel holder that threatens to cut my tenuous grip on sanity.
We keep our paper towels on a rack inside the sink cabinet door. We have enough other junk on the counters, so try to keep permanent fixtures there to a minimum. We had two plastic ones in a row that broke, so I purchased a metal one to replace it. It is spring loaded, so every time (and I mean every. single. time.) I try to rip off a sheet of paper towel, the entire roll bounces off the rack, and rolls across the kitchen floor, completely unraveling as it goes. J. swears there is a way to rip one off and not have this happen. Apparently you cannot be in a hurry to wipe up a spill, be fighting with a three year old about wiping yogurt off her chin, or holding a baby at the same time. So. I need a new one. Only they don't sell them. We've tried in three stores recently. So, if you see one, will you just go ahead and send it to me?
The Cat in the Hat animated series
Let's go, go go! On an adventure. The thingamagig is up and away! Oh my goodness. This is the most annoying song and series since Caillou first assaulted my ears. And I can't get it out of my head. Help.
Thumbs Up:
Easy solutions to potentially complicated problems:
The other day it was freezing in here, and I kept checking to see which door had been left open. None that I could tell. Finally checked the thermostat and found the message "LOW BATT." Because J. was out of town, I was sure this meant that until I dragged all three kids out at 7PM in search of some watch sized battery we would be shivering. But NO. Thanks to handy location of thermostat user manual on the bookshelf next to it, I found that I could very easily dismantle and replace the two AA batteries. And it didn't even take a screwdriver, unlike most of the battery replacing I do around here.
Wild Kratts:
New PBS show featuring cartoon versions of the Kratt brothers, of Zooboomafoo fame. Wildly popular in this house, thanks to focus on wild animals as well as the hilarious (to O&N) money shot of character crashing into a tree. There is also a computer game version on PBS Kids, which is currently a little buggy and made my day a little ridiculous today because O. was determined to play it even though it was not working right. But he is so excited about the whole series that the promise of a new episode gets him out of bed immediately in the morning.
Bubble Guppies:
Another new morning viewing option: Nick Jr. variety. Semi-obnoxious in content and nothing new on the educational front, but the songs are pretty catchy. And did you really think we would escape anything with mermaids in this house?
Clean Van:
I cleared out all trash, random toys, and abandoned articles of clothing recently, and am blissfully relieved every time I slide open the doors to buckle everyone in. Biggest plus: found the missing Beauty and the Beast DVD.
Membership to Nature Center:
I recently signed O. up for a camp at our local nature center this summer, and went ahead and purchased a family membership to receive a discounted rate. When the weather was lovely last week, we went and wandered around the woods a little, and I was SO happy to think about all the afternoons we'll be able to go there whenever we want as soon as spring is here for good. Extra bonus: they are getting rid of their "Free Mondays" so I'm probably saving money no matter what!
Nieces:
Have I mentioned that I'm getting two of them?? At the same time?? My brother and sister in law are due with twins in June, and I'm having such fun shopping for them, planning a shower for them and thinking about things to share with them. We delivered boxes of baby clothes to their house last week, and even though it was a tiny bit sad to have all those baby girl clothes leave this house for good, I am thrilled that some of them will be on little ones that I will get to hug.
Valentine's Day:
It was so fun this year. O. really got into signing and preparing his cards for his class, was super excited about his class party, and seemed to think it was a great treat to have a holiday on what would otherwise have been a regular old Monday. We had a fun special dinner: steaks, green beans, potatoes and wine for J. and I; heart hot dogs for the kids in place of the steak, (and water with heart ice cubes in place of the wine). 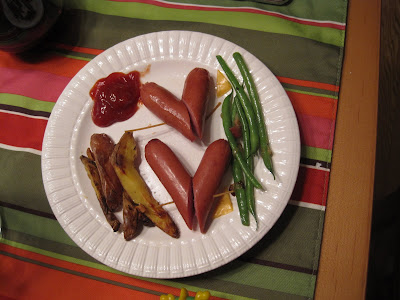 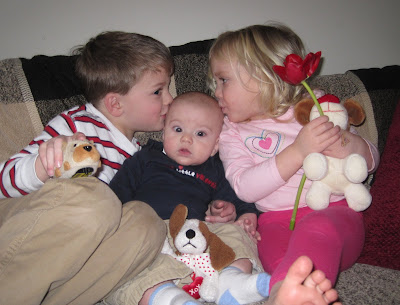 Princess Dress Up day at preschool:
This isn't actually the costume N. ended up wearing, because we had about three trial runs, but she was super excited about the idea that she could actually wear one of her beloved princess get-ups out of the house! 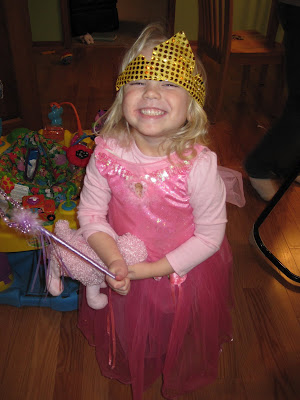 I'll keep my eye out for the paper towel holder for you.

LOVE the Nature Center! Was it very expensive to join? We went with my sister last year and it was so much fun. Feeding the frogs and the fish in the pond and playing Laura Ingalls in the cabin: good summer memories :)

Your babies are just so darn cute!

I'd be excited about twins, too, as long as I'm not the one having them.

The Cat in the Hat Song: yes. Ugh. And we've watched the Wild Kratts show a few times and liked it.

Also, that's what my daughter looks like every day she goes to preschool. Except on Thursday she wore her Minnie Mouse get-up. It's a battle I have chosen not to fight, and the school is down with it. Hallelujah!

PS: I heart those hot dogs!

We could use some change-up in the shows around here and I hear you on the Cat in the Hat. We actually don't watch that one much but Charlie is into rhymes and sometimes repeats "The cat in the hat knows a lot about that" to the point of annoyance.

I give you so many props for the single parent gig. My hubby does not travel for as long as yours does, but it feels like I am on my own and dealing with stuff I don't want to often enough.

Glad to see All Thumbs Thursday making an appearance somewhere. As ever, I miss you.

Wait!! Forgot to comment on the adorable heart hot dog and the sweet food styling of the entire plate shot. Lovely!

I am always looking for TV alternatives, although Sophie's annoying TV shows are The Fresh Beat Band and Little Bear. Kiki, Twist, Mirena and Shout just about put me over the edge.

Sophie is also a princess dress up devotee. She can be found in one of her princess outfits most days and EVERY SINGLE DAY at the gym day care where they have a wide variety of dress up costumes.

I was just looking into a summer camp at a local nature center here but the price (about $700 for a 6wk program) turned me off of it. I would love to do something like that, though, because Soph loves animals and nature.

over the door towel rack said...

This is sweet!
just found your lovely blog :) i like-y what i see!