I'm having a little trouble keeping up with the posts these days. The laundry is relentless*, and so are those kids of mine, though their relentlessness is more lovable. Have I mentioned there are no naps? Well, L. takes them, but not on any predictable schedule, and not for any predictable time.
Anyhow, it's taken me a couple of weeks to get the following photos uploaded.
O.'s school was sponsoring a movie night as a family activity and fundraiser. O. really wanted to go, but the idea of mobilizing the troops starting at 8:00 and hanging out in the elementary school gym was not exactly my idea of Friday night fun.
O. has been begging for a fire in our fireplace, mostly so he could roast marshmallows. We just haven't really gotten it together to do so all winter. I decided we would make our own Friday night family fun and have a little indoor camp out.
Daddy could build the fire, I would supervise the marshmallows, and the two big kids could hang out in O.'s shark tent and watch a flick.
O. took to this idea immediately. I didn't mention the movie right away, and he jumped right to his own idealized version of a camp out. It involved sleeping bags, flashlights, and scary stories. J. wondered aloud "Didn't we used to have a tent?"
And that led to this: 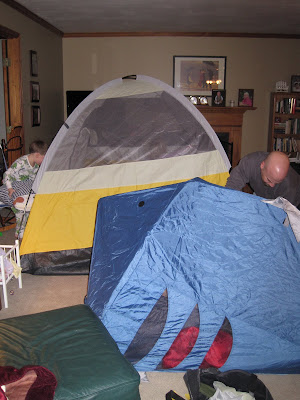 Apparently, we did still have a tent. Apparently we also never actually used it. Everything was still in its original packaging. Guess we can never claim to have been 'outdoorsy' in our pre-children life.
However, we did have the foresight to buy one big enough for our five person family, even back when we were dating! 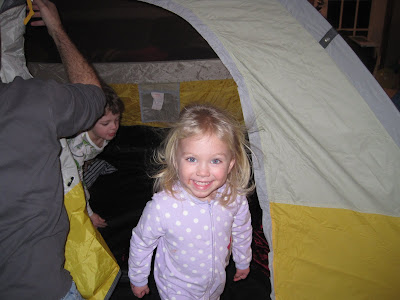 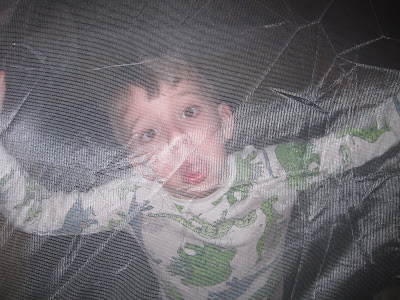 They were so excited about this new fixture of the family room they were doing full body dives in and out of it. 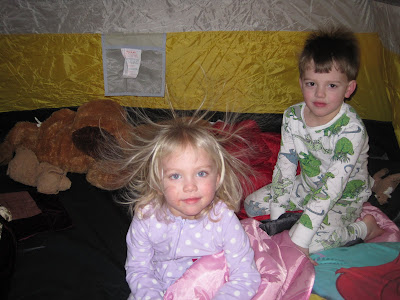 All moved in for the night and full of toasted marshmallows. How do you like the hair? 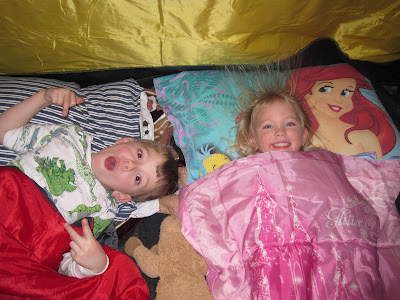 Yeah, they really look like they are going to sleep in there, don't they?
We let them goof around and giggle and somersault from end to end of it on their own until about 10:00. Then they both were crying about the other being too close or too far away from the other, and fighting over having the lights on or off. J. had to lay the smack down, and tell them if they didn't go to sleep right now, they'd be heading back to their own beds. Some sobbing ensued, but they fell asleep and STAYED THERE until 7:00AM. The baby slept in his own crib, J. and I in our own bed. Beautiful. The tent stayed up through the weekend and became a favorite napping spot for the dog.
More tears when we took it down, but I have a feeling we'll be seeing it re-emerge this summer. Any bets on whether anyone would actually make it through the night in the backyard?
*I'm not sure why it's the laundry that's getting to me lately. All the house stuff is relentless. I guess we actually do need clean clothes to wear. Clean surfaces to live in, not so much. Though they would be nice.
Posted by E... at 8:33 AM

Wow! I can't believe they slept in there all night -- truly a beautiful thing! I definitely want a post on the back yard camp out.

Laundry truly is never-ending. And I can't do the task to completion. I can wash the clothes and maybe fold them, but I can't do all that and also put them away. No way.

These pictures are adorable, especially N's static hair! We have camped out in our backyard (read: JOE camped out with the kids who made it all night; I stayed in the house to "make sure" they could get in if they needed to...that worked for me!). Definitely good times and great memories for the kids!

I have often said that laundry is the bain of my existence. Now that Elijah and Isabel are older, and I'm in school, the only laundry I'm doing is mine, Gabe's, and the towels/sheets. They all do their own. And laundry STILL sucks.

Maybe it's being cooped up all winter long. And having to wash all those pants/sweaters/sweatshirts, instead of shorts and t-shirts.

ps. Love that you roasted marshmallows inside!

That is one awesome tent. And some awesome static-hair. And, yes, it would be awesome if my baby could crawl around on the floor without his knees getting dirty. But, hey, he's hitting his developmental milestones, even if I'm missing my cleaning ones! =>

PS: Three awesomes in this comment ... How awesome is that??

Backyard campouts are fun, but we love REAL camping. There are tons of places that work well for young families and you'll have fun. I SWEAR.