I'd like you to meet the newest member of our family. He's moody, disagreeable, and sometimes downright mean. He also appears to suffer from hormonal surges and an apparent loss of hearing. Is this what almost six looks like these days?? 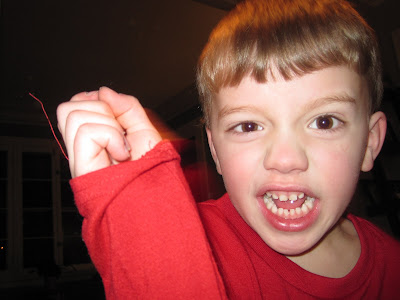 Okay, so this photo isn't playing fair. He was pretending to be a cat. But still, he makes this face at me at least twice a day when I say something he doesn't quite like.
I'm not sure when we started fighting about homework, but it's gotten to be painful. Some days we just don't do it because I don't want to have a battle. And hey, it's kindergarten.
It's a good thing we have a whole month to do each homework packet; we can always catch up. But I've come to dread the days when he brings a new independent reading book home because of the drama that we'll have to suffer through trying to figure out the words in it for the first time. He cries, says nonsense words instead of those on the page, rolls around and refuses to look at the book, and begs to do it later. Of course 'later' he does not want to do it either. I struggle with not wanting to push him too hard, yet not letting him be in control.
He changes his mind from one week to the next about what sport he might like to play this spring, and then occasionally throws a massive fit about playing any at all. I know he is too young to be in charge of these decisions, but it would be nice for him to be consistently enthusiastic about something.
This afternoon, he hid underneath the dining room table for at least ten minutes crying because his sister said she didn't want to play with him. When I got down on the floor to talk to him, he screamed "Leave me alone!!!"
Then, he spent an hour using his Leapster's drawing game to write messages.
"Gt Lost."
"No Pbl Ulawd" (no people allowed)
And then a large cartoon drawing of a mouth with the tongue sticking out, and a nose with snot coming out.
When N. asked him what he was doing, he said "I'm doing something bad. I'll tell you in your ear. Don't ever do this."
So. I guess I should be glad he's working on his writing. And he obviously knows what's right. Doesn't want to set a bad example.
But what I want to know is, when did a thirteen year old take over my son's body, and when is he going to leave??
I feel the need to say here that this boy of mine, my sensitive, bright and wonderful first born son, only acts this way at home. Oh, and at the doctor's office. The pediatrician (one in my large practice I'd never been a big fan of, and whom I will never see again, after this incident) told me in a very condescending tone that he would blame his attitude on too many video games when O. refused to put down his Leapster and immediately hop up onto the examining table.
At school, he is the sweet happy boy I miss so dearly when that other kid shows up. He runs to hug me when I come to volunteer, gets along with other children, and pays attention well enough to repeat whole lessons back to me.
He's doing fine. He's an excellent big brother to both his sister and his brother, plays imaginatively and enthusiastically. (He does make an excellent cat, or cheetah, or polar bear, or any animal you happen to name) He's occasionally super super helpful, like the time a week ago when he volunteered to help me with the laundry and sorted three baskets full of clothes by color. He ate most of his dinner two nights in a row this week.
But, he knows where every single one of my buttons resides, and lots of days, it's his job to push them.
Posted by E... at 4:39 PM

Weird, b/c I'm going through this same thing with my almost 13-year old...

Stick to your guns, love them through it, and when all else fails, suck down some margaritas with a girlfriend who will understand.

No matter what animal they decide to be (opposable thumbs or not), they all know how to push buttons, don't they??

PS: I don't sort my laundry by color. I just throw it all in. Can we still be friends??)

What do they say (whoever "they" are) -- that thing about how kids push moms buttons the most because they know it's safe because their moms love them so much and so well? Don't you feel loved?!