My boy is getting so big. He's grown visibly taller in the last couple of months, and now has a clear sign of how much older he's become before my very eyes.
He's old enough to say "On it!" when I ask him to help get the supplies for L.'s bath. Old enough to get invited to a laser tag birthday party, go on a field trip at school, and have very clear opinions about the kind of shoes he wants to replace his worn out sneakers. Young enough to still want a ride in the stroller on a trip to the zoo. And still young enough to tell me that while he didn't get a great view of the Tooth Fairy, he kept his eyes open a little while he was sleeping and saw some yellow dust.
O. has had a loose tooth for about a month now, and everyone has been a little too queasy to actually yank it out. O. was a little horrified by the story J. told him about Papa tying a string to his aunt's tooth when she was little and slamming the door to have it yanked out, and wouldn't let J. anywhere near it for a while.
On Wednesday, O. could not keep his tongue off of it, and it was almost popping out on its own. I was hoping we might make it until J. came back in town on Thursday. O. was hoping to lose it at school, where you get a special holder and sticker from the nurse.
But lo and behold, halfway through Wednesday's bedtime routine, it fell out while O. was brushing his teeth. "And it didn't even hurt!" he was glad to announce.
The tooth fairy brought O. a gold dollar coin and a very nice note complimenting him on his dental hygiene, all rolled up and tied with dental floss. 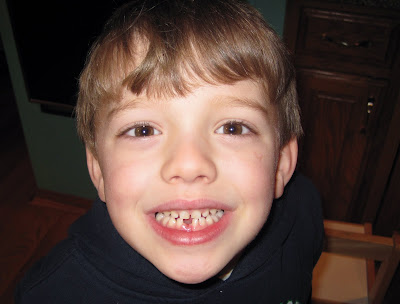 O. says he misses having a tooth to wiggle. I have an idea there are some more that will be ready soon.
Posted by E... at 8:15 PM

I love those sweet, gappy smiles. My older two keep pretending they have a lose tooth (thanks to a recent episode of Word World where Shark loses his first tooth). Playing Tooth Fairy is a popular game around here, and I am running out of make-believe quarters. Somehow, I don't think real quarters are going to cut it when the real Tooth Fairy comes to town!