Day Eight of Gratitude: I Vote For More Afternoons Like Today

It's Election Day today. Did you vote? I did. Some elections certainly seem more important than others, but I'm thankful that I get to have a say so about that kind of world my family lives in, so I'll keep exercising my right to vote whenever I get the chance.

I'm also thankful that I have the kind of marriage where my husband and I can, on the surface, disagree about a large portion of the issues and candidates on the ballot, have an argument about those issues in the morning, walk into the polling station together and effectively cancel out many of each others' votes, but at the end of the day, still respect and admire each other and our stances.  At the core, we're not that far apart from each other, just lean a little in opposite directions on that political spectrum.  I can often see the validity of his arguments, even if I'm not wiling to admit it. (or adopt them!)  I'm so thankful to live in a world where I am not forced to submit to my husband's will or have him speak for me, with our votes or anything else.

On top of all of that, there was no school for O. on Election Day.  It was a stunningly gorgeous fall day.  The kind that is rare enough in Ohio that we're able to store up the fond memory of it to get through thick humid days in August, or the grey frozen rain of early March.  I am thankful that I got to spend the entirety of this glorious afternoon with all three of my kids, exploring the zoo.  They were all amazingly and surprisingly cooperative.

"Aren't I doing a great job of not whining about walking, Mommy?" N. asked at one point.

They had a great day with each other: 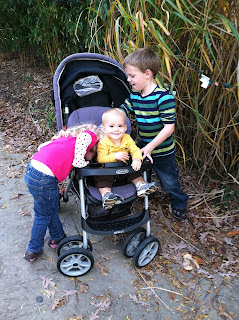 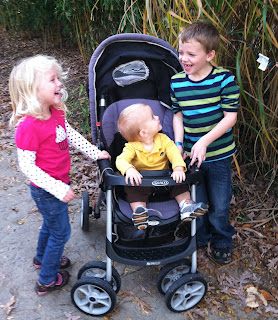 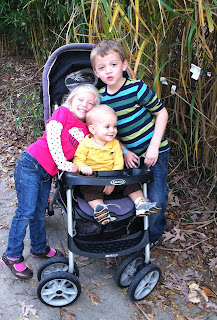 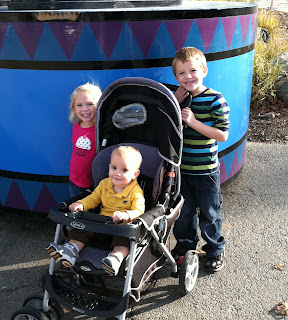 Great title to this post! I think most people who consider themselves political opposites have more in common than they imagine. It's a shame that the current political climate both exaggerates and simplifies the differences instead of encouraging reasonable conversation and rewarding genuine attempts to find common ground. Definitely thankful that we can all have our vote and our say.

We had an ugly, rainy one here, but it will still a nice afternoon in its own way. I'm smiling thinking of you and the crew enjoying a bonus beautiful day at the zoo!

Oh, I remember those fun zoo days! Great pictures of their smiles, and L's expression in that last pic made me giggle! It really was a beautiful day, wasn't it?

ps. We still need to meet up for coffee and package pickup! Any day next week work for you?

I'd be grateful just for one of my kiddos to walk instead of whine and walk. Could their smiles be any lovelier? =>