Of Marshmallows and Rice

Mini-marshmallows are a pretty hot commodity around here.  L. eats them by the fistful, O. needs them for his two marshmallow shooter guns, and N. is always up for making a pan of rice krispie treats.  I'm not sure why I thought we needed another way to have them strewn all about the kitchen.  But, the recent project we worked on using them was a much bigger success than I anticipated.
One of the very first things I pinned to a board on Pinterest was a picture of structures made with mini-marshmallows and toothpicks.  I went back to the pin, and tried to follow it to its source.  Unfortunately, it led nowhere, so I can't link you to my inspiration, but the point is, I got a box of toothpicks out for the kiddos, poured some marshmallows in a bowl, and let them have at it.
O. got really into the construction thing, after I demonstrated a couple of shapes for him.

He started with a simple square, and ended up with this: 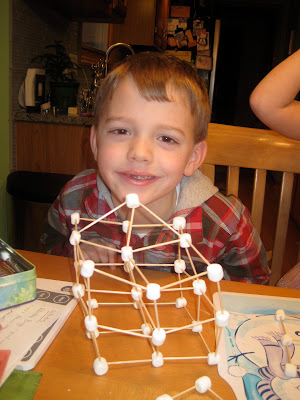 Along the way, we problem solved some structural issues, debating what would be the strongest way to build and to support the growing levels. We also discussed architecture as a career possibility, something that would combine his current love for drawing with an eye for building. 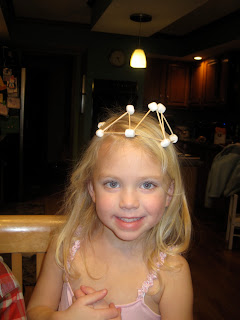 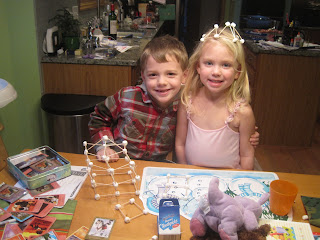 N., of course, decided to make a crown.  Guess I should have suggested fashion design for a vocation, but I'm pretty sure she knows that's a step down from princess.  And she was already feeling more like a ballerina that day, as you may be able to tell.

All I know is, they got along really well in the hour before dinner that day.  And when L. disappeared with the bag of marshmallows, I'm pretty sure he only ate half of it.

And...just in case you think my Pinterest projects are all aimed at the preschool and older set, here's a photo of a one I made for L. as a gift for Christmas.  It's an I-Spy bottle, filled with rice and small odds, ends and trinkets from around our house.  I've seen similar gadgets in toy catalogs at pretty high prices, and had thought it would be pretty easy to duplicate at home.  Whether or not L. would actually use it to play I-Spy, I knew he would enjoy shaking it up.

However, making it out of standard water bottle not only seemed less than aesthetically pleasing, I also wasn't sure I'd be able to find enough objects small enough to fit in the small opening at the top.  So, when I saw this version, I became obsessed with finding a similar vessel to make my own version.
The author of the blog where I found the idea mentions that she used a bottle from a specialty home store.  I figured that was code for TJ Maxx or Home Goods, so I checked out both.  I found a similar bottle, but it was made of GLASS.  Not so good for my toddler to be chucking across the hardwood floors.  I thought I was going to have to settle for a re-usable clear plastic water bottle I bought at TJ's instead.  But then, on a separate trip to Home Goods, I found a whole four pack of the bottles (the brand name is Voss).
Turns out, that wide lid actually conceals an opening the same size as a standard water bottle.  That will teach me to get compulsive about a version of something that mostly exists in my head.  Anyway, I was able to find objects that fit inside, and the project ended up working out pretty well.  J. applied some Loc-Tite to the lid so that it would be at least semi-permanently sealed, and so far it has not come open.  L. does enjoy using it as a musical instrument mostly, but the other kids like to look around to see what is concealed inside it.  I don't think O. realizes I made it with their junk yet, because he keeps saying "Hey!  We have a little dinosaur like that!"

I'd like to say these projects are evidence that you can have fun with objects you just have lying around the house.  The 10 plus dollars I spent tracking down bottles for the I-Spy would serve as direct contradiction to that, and I'm pretty sure we now need to replenish the cupboard with both toothpicks and marshmallows.  But that's okay.  I'm pretty happy with the experience of both these crafts.

How about you?  How do you keep your toddler entertained?  What saves the hour before dinner in your house?

If you have any Pinteresting to share, either head on over to mep's to link up with the Real Women of Pinterest, or let me know and I'll post your pictures here!

I really think the toothpicks and marshmallows sounds like fun! I have to admit I laughed out loud when I saw the crown ;)

Love both projects. Will have to keep those in mind the next time i hear "but i don't know what to do right now..."

How did I miss this post last week? Sorry! Can I say I am absolutely delighted with the idea of these marshmallow structures. The boys would eat this up on many levels. I think we've got our plan for Sweet P's naptime tomorrow. I'm pretty sure that I will now be seeking out those Voss bottles at Home Goods, that I will buy some, and that I will get them home, see them someday, and try to remember why I bought them in the first place. But when I remember ... I'll make a little I-Spy Shaker. Looks fun. Cracks me up that O has not quite figured out where the stuff came from!

I'm a big fan of the I Spy shaker, as you know. And not just because I got to use up this bag of glitter-confetti stuff that had been driving me bonkers with its tendency to stick to everything.

And marshmallows? We are having withdrawals because Romania is a marshmallow-less country. Probably, that's for the greater good ... of society and our sugar levels. =>