Dinner at the Picky Street Cafe

I've long thought if I were going to write a book, one of the angles I've got the corner of the market on is trying to feed picky kids.  Notice that I said "trying," not actually succeeding.  I've been going at it for close to ten years now, and I'm not sure we're really any better off now than when we started introducing rice cereal and pureed squash.

I could go on for volumes about the techniques I've tried to get my kids to eat anything that does not come out of a box or in an unnatural shade of orange.  In large part, our approach involves exposing our kids to many different foods as many times as we can stand it, involving them in the process of choosing and cooking whenever possible, and trying to avoid turning eating food into a battle of wills. You know, all the things all the books and articles and blog posts say to do.  It mostly feels like a marathon we're running with no real end in sight and no idea if we're even on the right road.

Chances are, if you've ever heard me talk about feeding my kids, at one time or another you'll have heard me claim that though I usually make what my kids want for breakfast and lunch, one thing I do not do is short order cook for my kids at dinner time.  What I make for dinner is what we're having for dinner.  Eat it or not, but you're not getting an extra plate of chicken nuggets out of me.

But truth be told, there should be a big old asterisk in a comic book thought bubble above my head every time I trot out that statement.  Because on nights when J... is not here, (and those of you that know the comings and goings of this crew know that happens a good chunk of the time), there is an awfully good chance that there is some short order cooking going on around here.

We do have a few meals that J... hardly ever gets to eat, because they are the standard "Daddy's out of town" meals that both easy to prepare, and are appealing to all the kids.  Tacos, pizza, brinner and spaghetti with meatballs all fall into this camp.

However, especially in the summer, when we've been outside playing all afternoon, or at the pool or some other place, and we don't have any plans to meet our friends at the Mexican joint down the street, dinner without Daddy starts to look a little more like some poor excuse for a diner. Only with a lot more whining and not even any sub-par tips to tuck in an apron pocket. 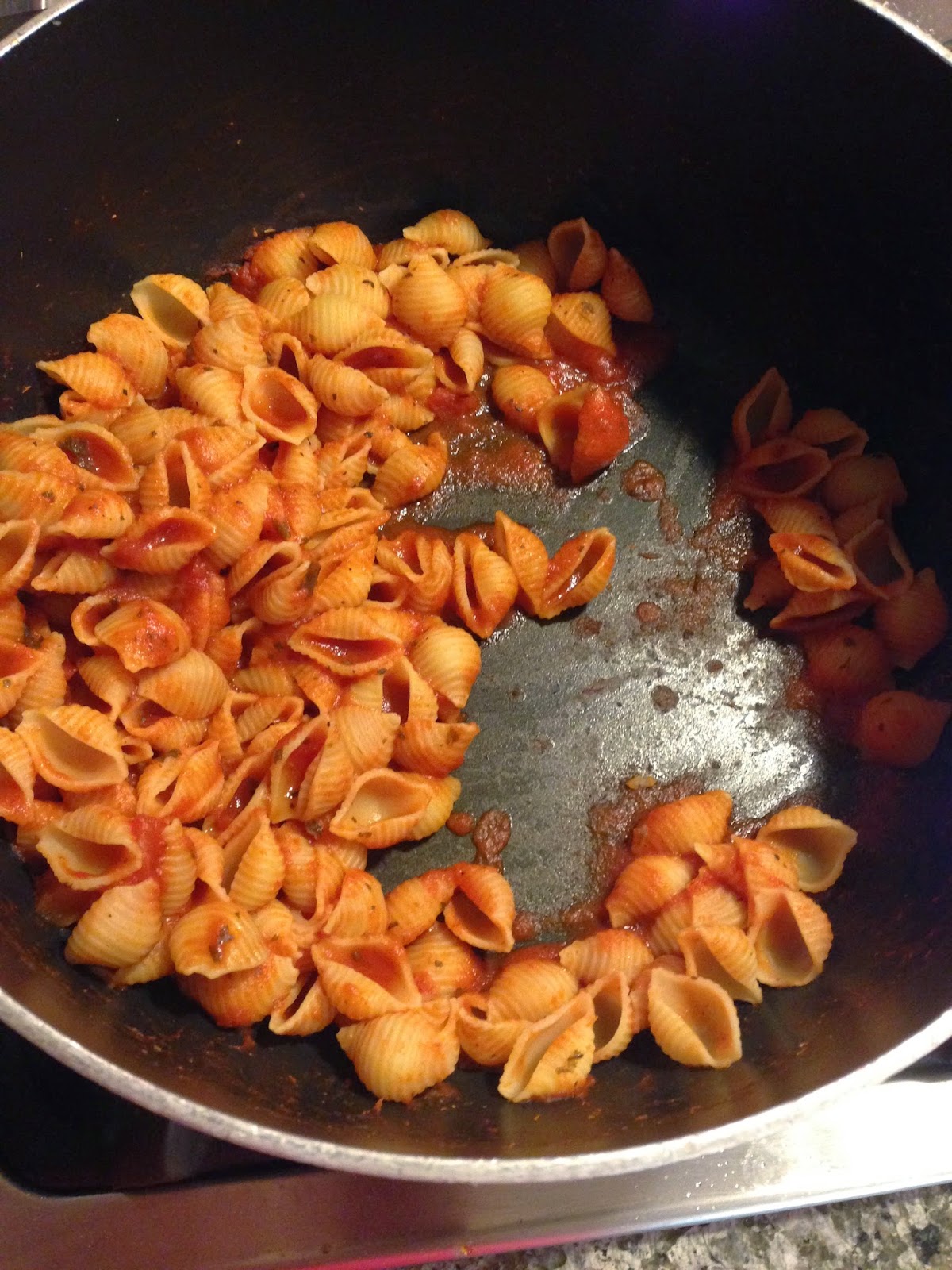 Last night, for example, I had two pots on the stove, one with water to boil shell pasta, and the other to simmer a couple of hot dogs.  N. and L. had pasta with jarred spaghetti sauce, and O. had his new normal, which is a Skyline Chili knock off hot dog with cheese. 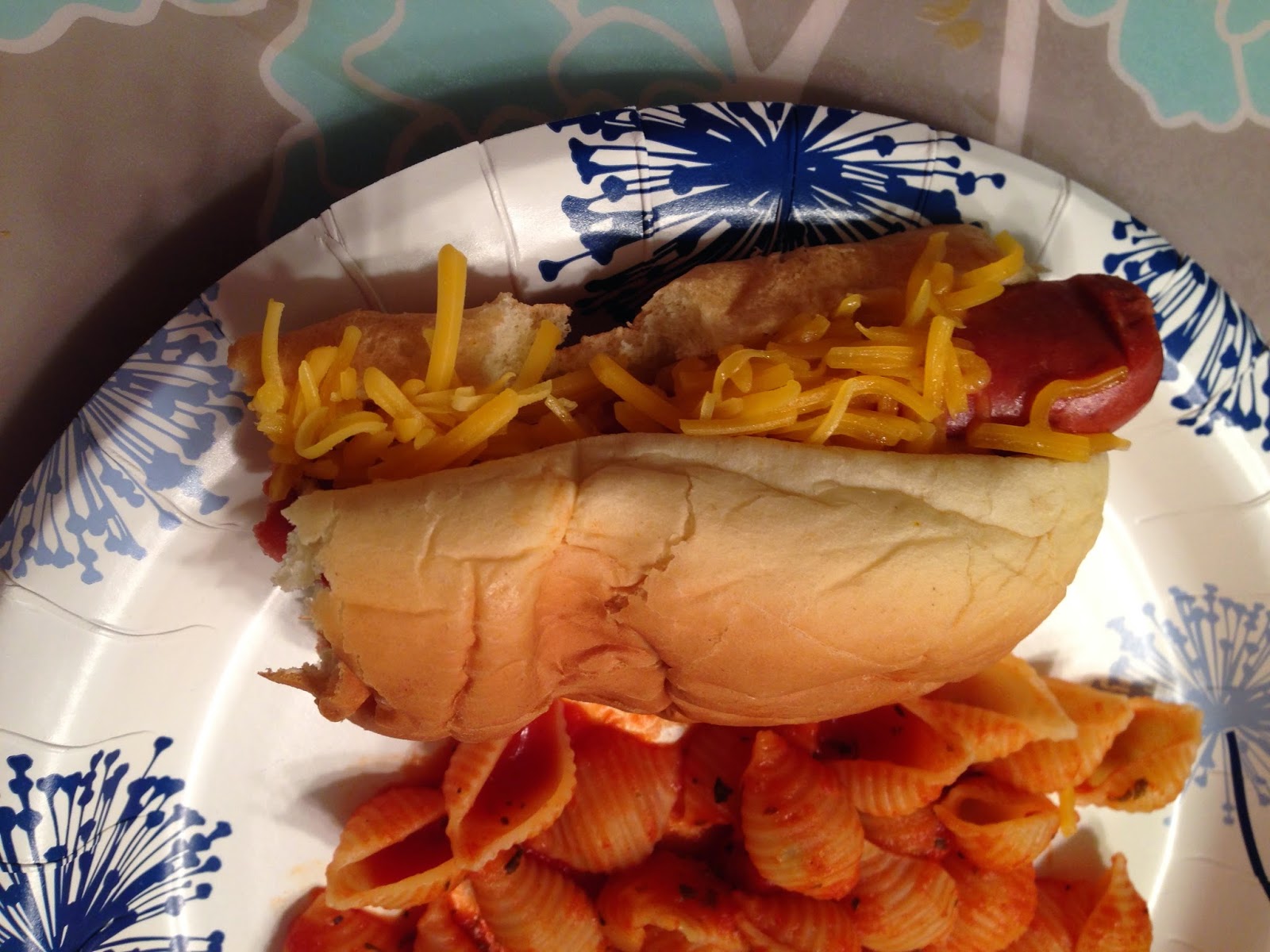 Which left one person in the house to feed.  I wish I could just get by with eating a few bites of whatever's left on my kids' plate.  Or a bowl of cereal at the kitchen sink.  But if and when I skip a meal, soon all the other food in the house will start to look good.  Like, even a half a box of Triscuits shoved in the back of the snack cabinet.  Or five packs of the animal fruit snacks no one else will eat. 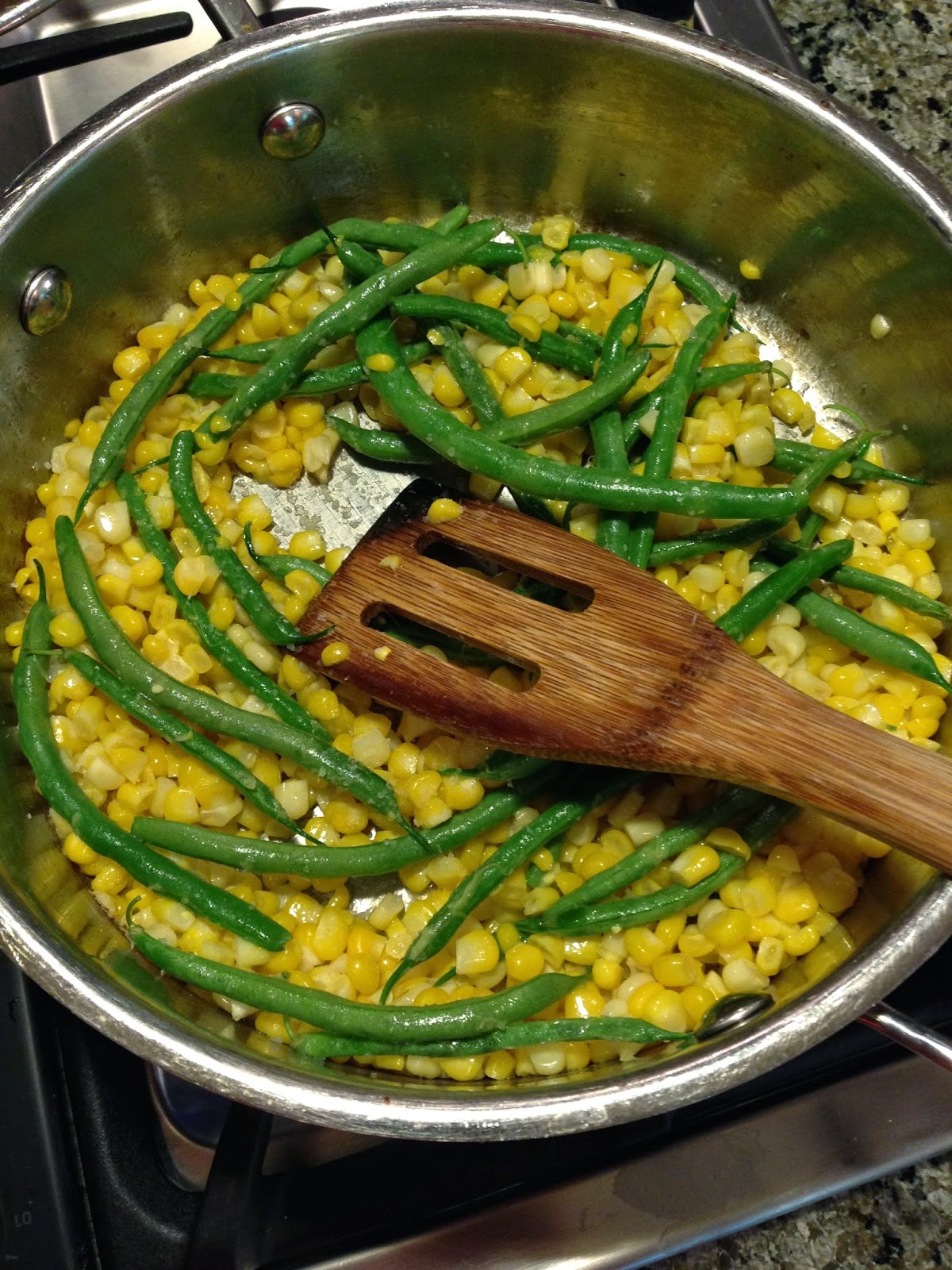 So, I cook something for myself.  Actually, cooking for myself is one of my favorite things to do.  I have never really liked cold sandwiches, and I can't convince myself (or my stomach) that a salad is a meal, even at lunch.  I often heat up and combine leftovers at lunchtime.

But nights when I'm the only adult around, dinner is often a big pan of whatever vegetable no one else in the house will eat.  Roasted Brussels Sprouts.  Carmelized carrots.  And the summer staple:  Sauteed corn and green beans.  Add some balsamic vinegar to any of the above, and we are in business.


And then I just throw containers of whatever fruit is in the fridge on the table and hope someone reaches in there a couple of times.  The dragon fruit on the paper plate was one the kids thought looked cool in the store and begged me to buy, even though we've been down that road before, and of course no one wanted to eat that gelatinous scary stuff once it was cut open.  In the trash at the end of dinner.  Oh well.  There's another one of those suggested techniques to try to curb the picky eating: "let them make their own food choices" we can cross off the list.. 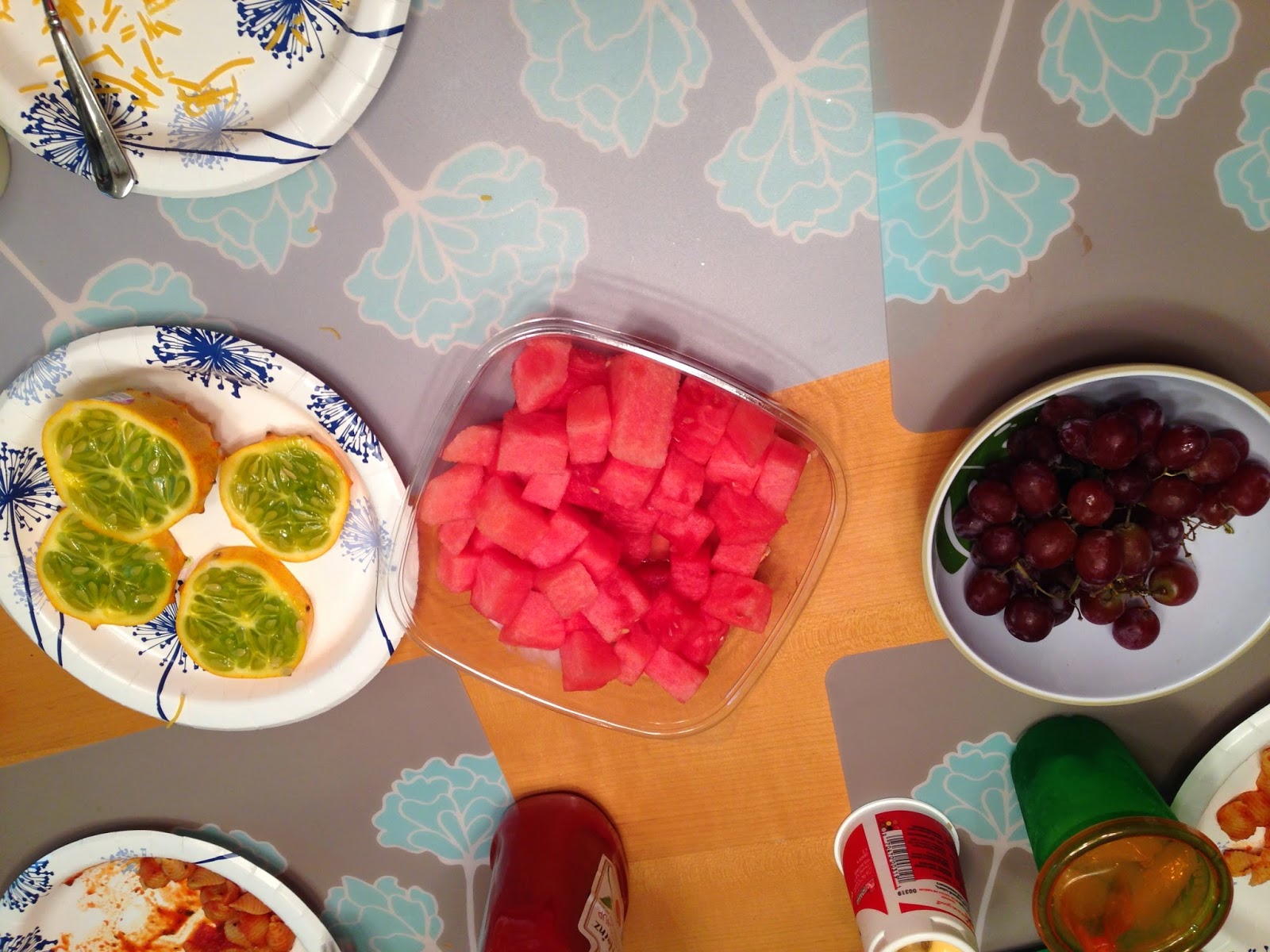 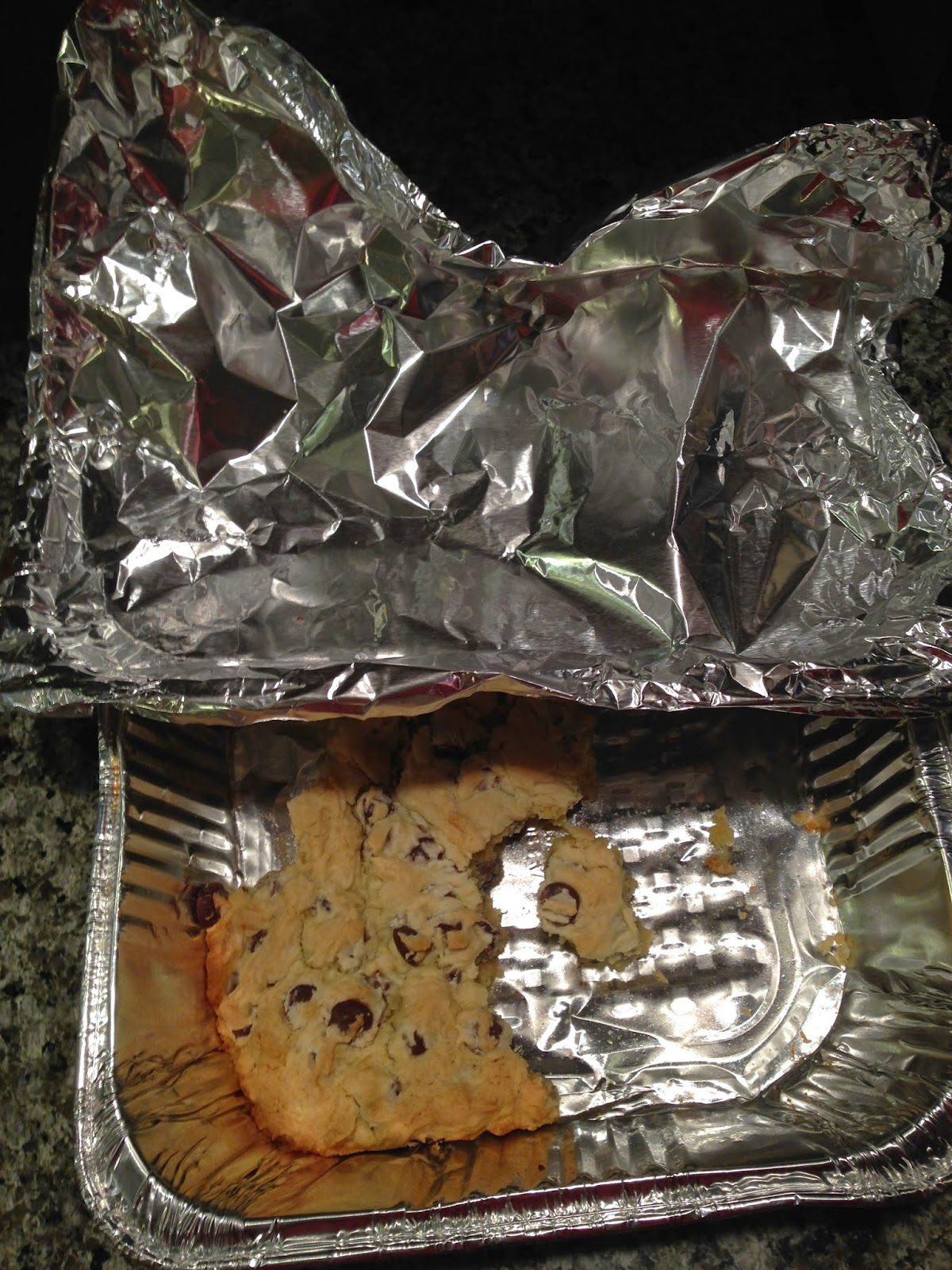 And here's what they really ate for dinner.  The rest of the pan of chocolate chip bars I made to take on a trip with us, and forgot to bring, which I just found in the freezer and defrosted today.


So yes, on nights when our whole family is home, we eat dinner as a family, and we try to all eat the same thing.  Or at least we all have the same thing on our plate.  What that usually means is that 2 out of 3 children are suddenly no longer in need of calories as soon as they sit down at the table. Then they eat the five bites I mandate, and then wait until the last dish is put in the dishwasher to alert us that really, a granola bar or cheese and crackers must be in their belly immediately.

It's a battle I hope we are winning by increments, but allow myself a little grace on the days we throw up the white flag of surrender to crappy eating once again.  At least I get to eat what I want those days, too.
Posted by E... at 11:20 AM

What a treat to check smallafterall and find a NEW POST! We deal with picky eating around here, but I feel like I am barely fighting a fight anymore. Which kind of sucks because my own interest in cooking has taken a nosedive. I used to like to think about recipes, trying stuff, etc. but it is hard to be motivated when at best 1.5 of my kids will even try something new. T is literally begging me to institute a rotation of favorites like his mom did. I'm not opposed, but I don't know that we have even a handful of meals that all three kids would eat. Not even when we're talking nuggets, hot dogs, peanut butter & jelly, Kraft mac and cheese. All of this is just to say that I admire that you are fighting and think, from this post, that you are doing very well!!!!! Maybe I should go now and make a list of what (almost) everyone would eat. Or, maybe I should stop worrying about my extreme picky case and tell him he can make his own PB&J every night if he's hungry. But I feel bad because I love him a lot and really want him to eat.

I wanted to add that one of my "feeding my self" strategies is to make a big container of quinoa and then throw leftovers in there (hot or cold) and top with some kind of sauce. It could be quinoa, corn, black beans, and tortilla chips with salsa and ranch dressing. Quinoa, grape tomatoes, green or red onion, feta, and balsamic. I have finally stopped buying and throwing away lettuce for my mythical salads for lunch.