I'm not sure when or why this resurgence in blog writing has taken a turn to food writing.  I promise, there are things I think about besides what goes into my mouth or the mouths of my family members. However, this seems to be a safe way to get me to actually, you know, write. And man, I do really like thinking about food. So on we go.

Sunday has such a distinct feel about it as a day, doesn't it?  I mean, after the Monday drudgery and Friday's party feeling (we have an animated toy hamster that sings the Friday song, and every  morning on the way out the door I sing the same to my kids.  "Getting' down on Friday...Partyin' Partyin'...looking forward to the weekend"  They love it, I tell you.), Sunday has the most clear attributes.

It's interesting, though, that the adult members of our household have such different approaches to a Sunday attitude.  I absolutely get hit with the "Sunday Blahs" and the anxious dread of good things coming to an end before the start of a new school/work week.  But I think they hit my husband a little harder than they do me, and I don't think that's just because I don't leave the house to go to work on Monday.

Growing up, Sunday was very particularly a family day.  We would go to church in the morning, and often get breakfast out, or come home and eat brunch food or egg sandwiches for lunch.  Sunday afternoons were usually the day we did some sort of outing or adventure as a family, often taking a drive somewhere or visiting a park or museum or some other event that my parents had sought out.  Or it was just an afternoon we spent together in the house.

I know Sunday dinner often has the connotation of a time when extended family gets together and cooks a relatively elaborate meal, sometimes with an old fashioned feel, like a  roast or casserole. Something you'd probably have serve mashed potatoes.  Sunday dinner wasn't usually like that in my house as a child; we probably had soup and sandwiches or homemade pizza more Sundays than not.

However, Sunday has still come to connote a day when one should spend a little more time on meal preparation.  Weeknight meals are usually something I assemble while the kids are at school, or else pull off on the fly very quickly in between homework and after school activities.  So while I sometimes do things that take a while to cook, I don't often have time for things that are intensively hands-on.  So on Sundays, I find myself wanting to cook a complicated curry or the chicken in a pan sauce that looked good in a magazine.  It's the time I find myself drawn to pins on my the Pinterest food board.  Often, while the big kids are watching Minecraft videos and endless reruns of the Suite Life on Deck, and J. is in the basement watching football and playing Legos with L.,  I'm in the kitchen listening to a podcast and chopping vegetables and searing a piece of meat.

This is not at all J.'s idea of the kind of food that one should eat on a Sunday.  He spent many of his weekends growing up at his dad's house, going to a movie with his siblings and then probably eating out.  Sunday was the day he had to go back his mom's and get homework done and then get ready to go to school.  It was a fun day, but a transition kind of day.  Watching sports has also always been a key part of his Sunday routine.  Making a big pan of oven baked nachos with his sisters to eat while they watched the Browns was a much loved tradition.

For J., Sunday is a day that he mostly just wants to eat crappy, greasy hangover curing, stoner type food.  He wants to make chicken wings, or chili, or the aforementioned nachos.  Or more often, he just wants to go to Skyline or eat a giant cheeseburger.

These divergent ideas of what Sunday meals should look like have caused some conflict in our house for as long as J. and I have known one another.  By Sunday evening, on a day when I've willingly embarked on a course of putting together a fairly complicated meal, I suddenly (and irrationally, I KNOW), feel like some sort of drudge, cooking all afternoon while everyone else has been playing and resting and relaxing.  Then no one eats what I've made anyway, and then there I go, down into the Sunday blahs myself.

So, lately, I've been trying to figure out how to balance these two needs of ours to handle our Sunday preferences.  Sunday seems like the day we are most in need of comfort as we prepare to do battle with another week out in the world.  Clearly we have different ideas about what that comfort entails.  I decided for me, maybe it's time to go back to the meals of my own youth, ones that are not complicated or fancy, but instead have familiarity going for them.

Fall Sunday afternoons are clearly football afternoons in our house.  When Browns kickoff time arrives, J. wants to be on his couch if at all possible.  But I don't want to be in the house ALL day on one of our only days all together as a family.  We usually head out for some sort of adventure mid morning.  (We're going to add the church routine back in soon, I swear.  But that's a post for another day.)  Last weekend, it was a family hike at the nature center.  The kids grumbled and complained and cried about it all the way out of the house, but once we got there, it was lovely to all be together out in the fall sunshine.  Along the way, the kids made a project of gathering all the different flowers and foliage they could find, and made a gorgeous bouquet for our front hall table. 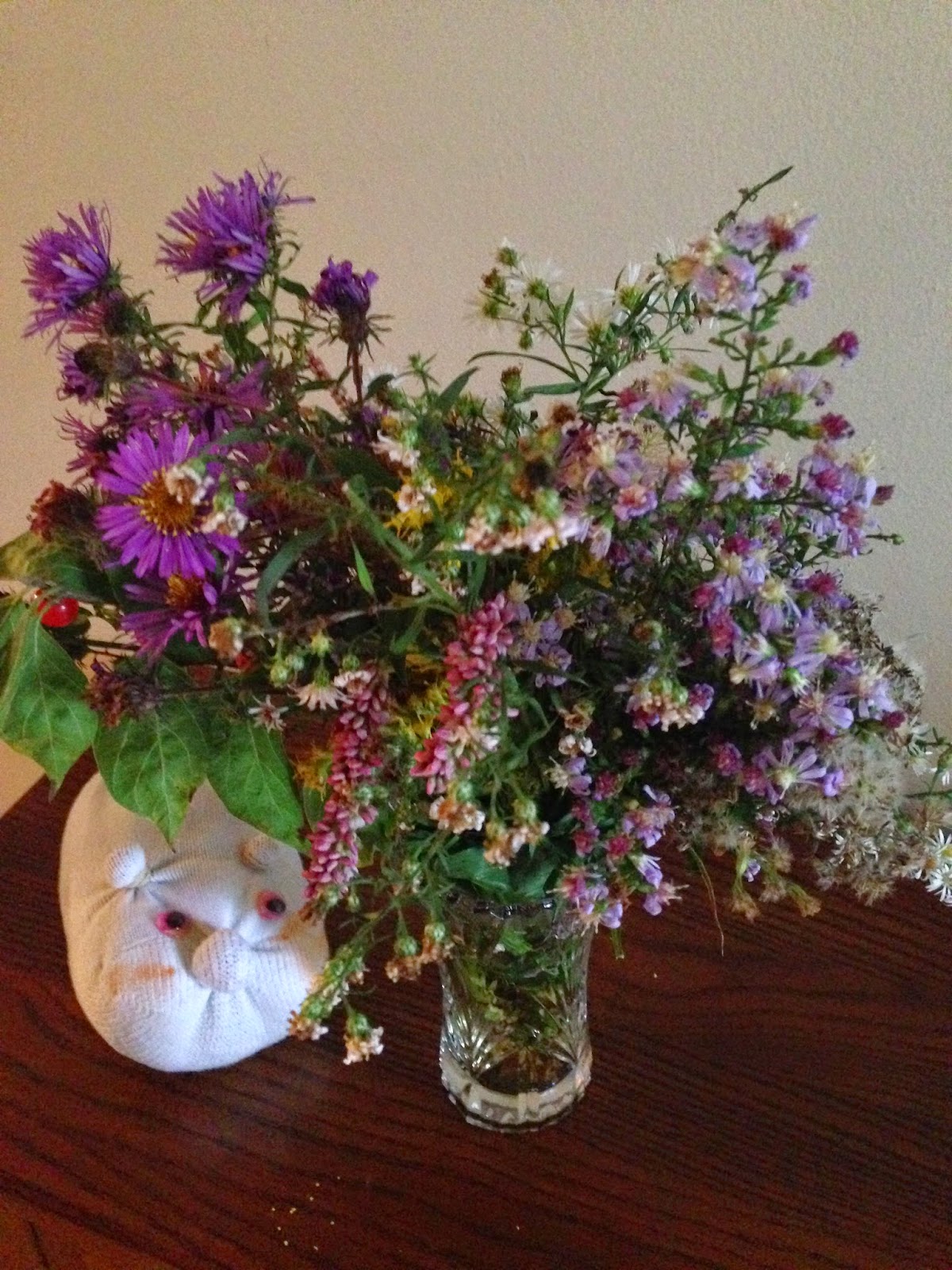 We were home in time for game time, and then Jim cooked up one of his favorite junk foods for a halftime timed lunch.  I think it was chicken wings this week: half spicy, half barbecue.  The kids of course, gobbled those right down.

Then, later,  I made a meal straight out of 1977.  Stuffed peppers, rice and sausage covered with tomato sauce and baked.  I wasn't sure how spicy the peppers were that came from our CSA, so I knew I had to make something else for the kids.  I'd always wanted to make porcupines, because even though I don't think my mom ever made them, they seem like a meal straight out of my childhood.  I used this recipe from my favorite food blog, Dinner A Love Story.  If you're like the rest of my family, and have no idea what a porcupine is, it's a meatball made with uncooked rice added in.  You simmer it in a sauce, usually a tomato based one, and the pieces of rice cook and stick out like little spines on a, you guessed it, porcupine. 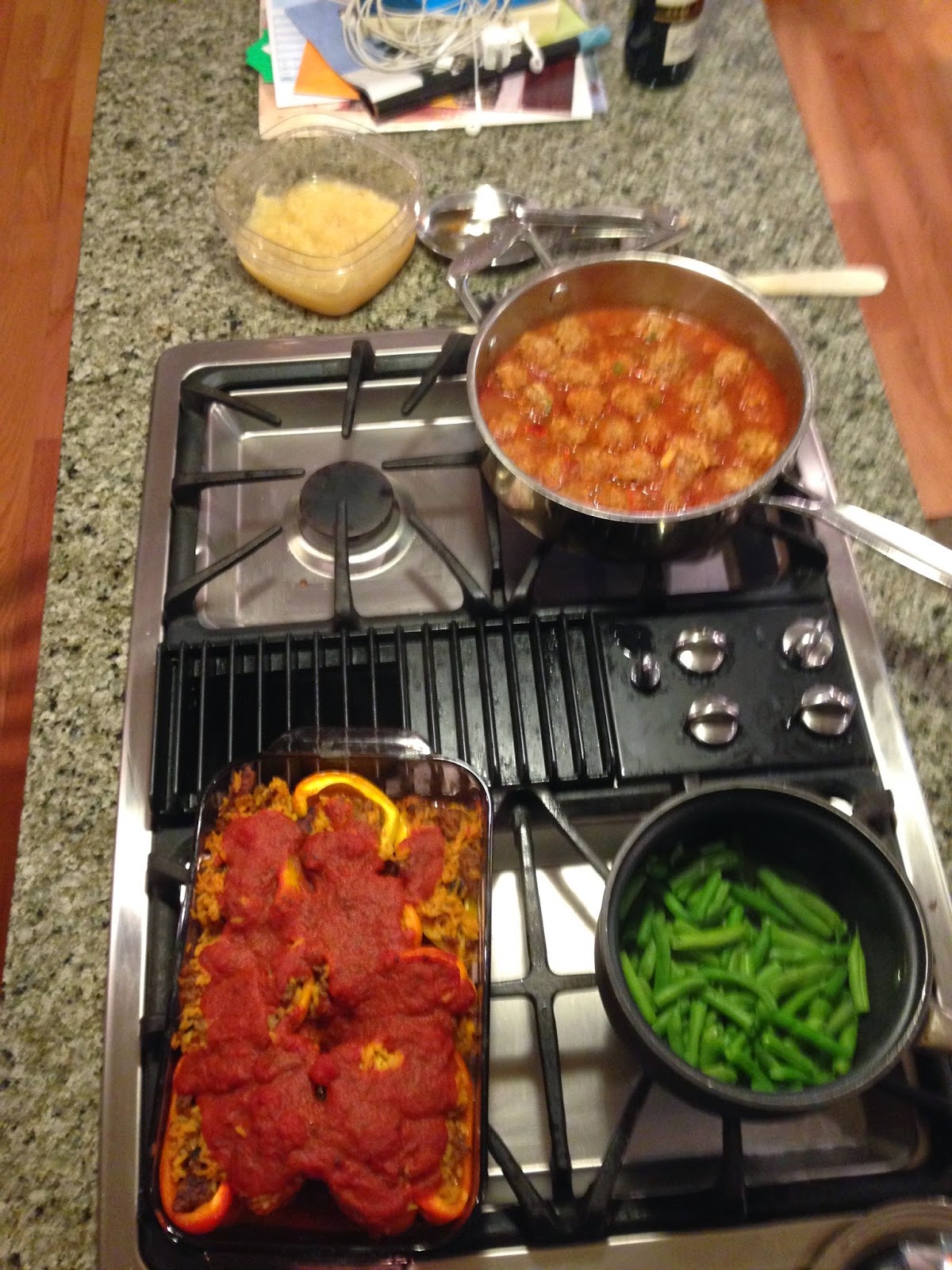 That night, I paired these main dishes with sides also straight from my childhood, homemade applesauce and green beans.  For some reason, breaking the green beans up into pieces and then steaming them seems so much different, and more from the past, than the way I typically make them these days, which is to  leave them long and sautee them (usually with bacon and onions).
This photo has the look of a lot of the meals that were on my table growing up.  Except for the bottle of wine and the messy stack of stuff on the end of the island.  My mom saved the wine for after our bedtime, and is a much better housekeeper than I am.

I can't say that the throwback supper was any more of hit with anyone than the things I usually make on Sundays.  But my attitude was better, and I like the idea of meshing the best of J.'s and my own Sunday nostalgia.  I wonder what the comfort foods of my own children's memory will become, what their Sunday family feeling will be when they are starting families of their own.  I think I'll still always want to attempt some more complicated meals sometimes, but I'm trying hard to remember that is something I'm doing for ME.  As always, I'll just keep showing up with the best of intentions, and hope that the better moments are the ones that stick.